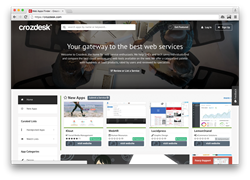 After 5 months of gathering feedback from our beta users we’re confident that we are ready for the next step. Our launch marks our first company anniversary and we’re excited to finally see our full system in action. - Nicholas Hopper (Founder & CEO)

Discovering and comparing web-apps just got easier. Crozdesk, a quickly growing web-app discovery platform, will exit its beta phase and officially launch on June 9th (12 noon - GMT), with a variety of new releases:

The Single-Sign-On Plugin: The single-sign-on button allows Crozdesk’s users to log into and effortlessly explore SaaS services on the fly. Partnering SaaS companies get fast, easy, and free exposure to an engaged user-base actively searching for new web-tools.

The Crozdesk Score: Crozdesk’s own algorithm dynamically scores services on the basis of large quantities of user feedback, stats and other information from around the web.

In tandem, these solutions will help web-app and SaaS users find products for virtually any purpose and help up and coming service providers get their name out there. Furthermore, major platform updates will be released to make service profiles more customisable and powerful.