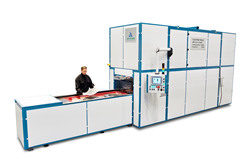 PZL-Świdnik’s new press, the latest model in the Avure fluid cell family, generates a forming pressure of 17,000 tons, making it possible to produce finished sheet metal parts with less labor hours and by reduced forming pressings. With two tandem forming tables that can accommodate several parts per cycle, the press will boost productivity and capacity for Poland’s largest helicopter manufacturer.

It is expected that PZL-Świdnik’s capacity in the high-pressure forming of metal sheets will be expanded by 30%. Initial tests indicated also a substantial potential to reduce labor hours and fabrication steps. The increased quality and capacity will allow the Świdnik plant to meet growing demand in the aviation industry.

The delivery of the QFC 0.7x1.8-800 press, which generates a pressure of 800 bar (11,600 psi) over the forming area, represents the 10th installation of this latest addition to Avure’s Flexform fluid cell press family. First deployed in 2013, the 10 new model presses are now operating in seven countries in four continents around the globe.

About AgustaWestland
With nearly 65 years of experience and having produced over 7,400 helicopters, PZL-Świdnik is the only Polish OEM with the capabilities to undertake helicopter design, research & development, system integration, manufacturing, support, training, and upgrades. The company’s range of rotorcraft can perform the complete spectrum of commercial and government roles. PZL-Świdnik is also a major indusrial partner in the aerospace industry, supplying aerostructures to many of the world’s leading manufacturers. PZL-Świdnik has been an AgustaWestland company since 2010.

About Avure Technologies
An innovator with a strong record of accomplishment, Avure Technologies (formerly known as ASEA, ABB, and Flow), demonstrates its expertise in high pressure by occupying leadership positions in industrial and food applications. The company is the largest global provider of ultra-high pressure systems utilized to form sheet metal, to process advanced materials, and to pasteurize foods without heat or chemicals.

Avure has installed over 1,700 high-pressure systems worldwide, more than all other competitors combined. These systems are characterized by technically sound design, superior reliability, energy efficiency, low maintenance costs, and many years of experience. Many Avure presses have been in service for more than 40 years, and some have surpassed 1 million high-pressure processing cycles.