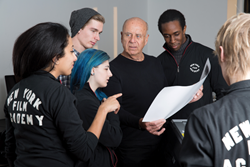 "It was great to have Mr. Gibson speak so candidly to prospective students about the world of photography and how our programs here at NYFA teach you in an immersive and practical environment."

"It was great to have Mr. Gibson speak so candidly to prospective students about the world of photography and how our programs here at NYFA teach you in an immersive and practical environment — as oppose to the traditional, sit, listen and watch approach,” said NYFA Photography Enrollment Advisor, Evan Leone.

Next on the Open House tour for Gibson are Los Angeles and New York City. Gibson will be conducting his special “Natural Light Portraits” Workshop at NYFA Los Angeles on June 20th from 1:00pm-2:30pm. Following that will be a New York Open House on July 11th at NYFA Battery Park, located at 17 Battery Place in Manhattan, from 12:00pm – 2:00pm.

Ralph Gibson is that rare artist who has touched the masters of the past half-century—from the Beat Generation in San Francisco to the vigor of yesterday’s born-digital, cross-media creations. He began his professional career as an assistant to Dorothea Lange and, to date, has published over 40 photography monographs and his photographs are included in over 170 museum collections around the world. Gibson holds honorary doctorates from the University of Maryland and Ohio Wesleyan University.

Gibson's awards include fellowships from the John Simon Guggenheim Foundation, Commandeur de L’Ordre des Arts et des Lettres de France, three National Endowment for the Arts awards, as well as the Leica Medal of Excellence, the Lucie Lifetime Award and the Silver Plumb Award. This year he received the Guild Hall Lifetime Achievements Award and a purchase award from the American Academy of Arts and Letters.

If you’re interested in attending one of our Open House Workshops with Ralph Gibson, please CLICK HERE.

NYFA offers several tracks in photography: one-year conservatory programs (offered in our NY, LA, and South Beach campuses) as well as MFA & BFA in Photography degree programs (offered exclusively at our Los Angeles and South Beach campuses) all of which provide state of the art equipment, as well as incredible backdrops against which to shoot original images. All conservatory course credits are transferable toward the degree programs.

In addition, all MFA, BFA, One and Two Year Photography Programs include a state-of-the-art Canon or Nikon HDSLR camera to keep.

About the New York Film Academy

New York Film Academy is accredited by the National Association of Schools of Art and Design (NASAD), and provides students with a variety of options to access a performing and visual arts education. With locations all around the world, the New York Film Academy has grown into an international film and performing arts school with a focus on learning by doing, providing its students with hands-on instruction. Students can choose to enroll in one of the Academy’s MFA, MA, BFA, BA, and AFA degree programs and short-term workshops in filmmaking, acting for film, photography, producing, 3D animation, cinematography, screenwriting, documentary filmmaking, musical theatre, game design, graphic design, illustration, digital editing and more.

Photographs of Ralph Gibson's work are available upon request.