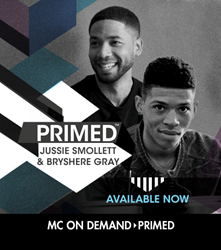 PRIMED: Jussie Smollett and Yazz will premiere Thursday, June 18th on Music Choice. It will be available on Music Choice On Demand (Directional: MC On Demand>Primed) and the MC App along with short vignettes appearing throughout the day on Music Choice Play. The duo will also be in heavy rotation on the Hip-Hop and R&B Music Channel. #MCPrimed

Primed was originally launched on Music Choice On Demand in 2013. Artists that have been featured include: Macklemore, Lorde, Imagine Dragons, A$AP Rocky and many more. For more information about Music Choice, log on to http://musicchoice.com/ or to become part of the Music Choice community join us on Twitter: @MusicChoice or Facebook.