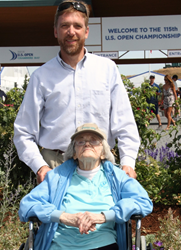 Hauser, a 94 year old former golfer, was excited and nervous to attend. Though she stopped playing golf at age 82, she still expresses her love for the sport. She lights up when she talks about it. This passion is what gave Tashena Taylor, DPT, Consonus Senior Rehab Director, the idea to send Hauser to the first U.S. Open Championship in Washington State through “What’s Your Dream.” This program by Marquis, the sister company of Consonus, helps seniors fulfill dreams.

Taylor and Naniofa Poulivaati-Mounga, Wesley Homes Director of Activities and Volunteer Services, had to figure out the logistics of getting highly coveted tickets for Hauser to Chambers Bay. Taylor consulted Kevin Anderson, President and CEO of Wesley Homes, who asked Pete Shimer of Deloitte if he had three tickets he could donate.

“Pete said he could donate the tickets and VIP passes to the Deloitte tent for Mary Ann, and Deloitte didn’t need any credit. He told me it was the right thing to do,” said Anderson. “It was such an uplifting thing to hear.”

Hauser doesn’t know that so many people pulled together to help her dream come true. She just knows that she is able to attend a game she loves while wearing her favorite golf club polo shirt.

“I just loved playing golf,” said Hauser. “I practiced a lot. I started golfing when I was 22. I took lessons every Tuesday, and then I’d go to my sister’s. She had 20 acres, and I’d practice there a lot. In my mind, I never thought of it as just playing golf.”

Her many hours of practice paid off. There were times when her scores at Jefferson Park Golf Club were better than her husband’s, and she’s won tournaments. Hauser’s crowning glory is a trophy she won in a Connecticut tournament for gross score, drive and putting. She proudly proclaimed, “That was my best game. I won every damn thing!”

The trophy means even more to Hauser as she recalled how the tournament organizers searched for five years in order to get the trophy to her, eventually finding her through her son, Tim.

As Hauser headed off to watch Tiger Woods, Kevin Na and golfers from around the world practice, she had one important piece of advice for beginners: “Get a pro to teach you!”