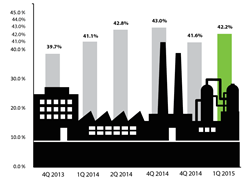 Credit Utilization Over the Past Six Quarters

U.S. businesses showed signs they were looking to grow in the first quarter of the year as the Commercial Finance Association (CFA) released its Quarterly Asset-Based Lending (ABL) Index Q1 2015, showing American businesses utilized 42.2% of their credit lines during the 1st quarter, an increase from 41.6% in Q4 2014, and up from 40.8% for the same quarter in 2014. Total committed credit lines increased 1.7% in the 1Q 2015 over the previous quarter and were 7.7.% higher than the same quarter in 2014.

Portfolio performance among reporting lenders was exceptionally strong in 1Q 2015. With respect to gross write-offs, 87% of lenders reported either a decrease or the same level of write-offs in 1Q 2015. Lenders’ non-accruing loans as a percentage of their total asset-based loans outstanding were once again lower than the previous quarter. Twenty percent of lenders reported a decrease in non-accruals in 1Q 2015 compared to the prior quarter.

“CFA’s ABL Quarterly Index Report provides more evidence that our economy has turned the corner and U.S. businesses were ready to grow in the first quarter. Growth in credit line commitments and utilization illustrate that companies are expanding, albeit cautiously and that asset-based lenders are a critical source of financing for that growth,” said Robert Trojan, Chief Executive Officer of the CFA.

A full copy of CFA’s Quarterly Asset-Based Lending Index is available at http://www.cfa.com.

Founded in 1944, the Commercial Finance Association is the international trade organization representing the asset-based lending, factoring, trade and supply chain finance industries, with nearly 300 member organizations throughout the U.S., Canada and around the world. CFA provides education, networking opportunities and industry advocacy to the global commercial finance community.