It was a very explosive Saturday night Eve of Destruction at Elko Speedway with great racing in the NASCAR Whelen All American series and lots of destruction after the racing was complete. 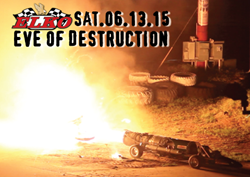 Chris Marek from Lakeville (MN) continued his great 2015 season with another win in the Hiway Federal Credit Union BIG 8 Late Model division, Marek has taken home the trophy in 5 of the first 6 races of the season. Dylan Moore finished 2nd place by 1.452 seconds and Michael Ostdiek finished third place in feature number one.

The field was inverted for the second feature and veteran driver Jon Lemke took home the trophy. “It feels good to get the first win out of the way,” said Lemke “the BIG 8′s are a tough class, anyone can win on any given night,” said Lemke “these cars are fun to drive, the 8 inch tire can really be a challenge.”

Marek moved his way up from the back of the pack in feature number two to finish in the third position, right behind Ryan Kamish who lost to Lemke by only .611 seconds.

Marek extended his point lead to 32 points over Dylan Moore in the standings.

Jeremy Wolff from Chaska (MN) won feature number one in the Genz-Ryan Thunder Car divison. Wolff beat out Conrad Jorgenson by .359 seconds with Harm Alken closely following in third place. This was the second win of the year from Wolff.

Brent Kane from Lonsdale (MN) won the second feature of the night, he shot to the front on a green-white-checkered finish and beat Adam Wiebusch by .734 seconds at the stripe. That is the third win of the season for Kane.

Jeremy Wolff is in a great battle with Kane for the lead in the point standings. Wolff leads Kane by only 3 points.

Tom Doten from St Paul (MN) won the first Pepsi Power Stock main event. Doten started up front and never looked back, he won by 1.111 seconds over Shawn Grabinger. “I’ve been here since the early 1990′s, it’s fun, it’s my adrenalin,”said Doten “it’s actually my sobriety, I’ve been clean and sober for over 13 years now.”
Paul Neisius from Hastings (MN) won the second Power Stock main event, he held off defending Champion Nick Oxborough by 1.724 seconds at the finish line. This was the first win of the season for Paul, his son Cole Neisius won on opening night.

Tom Doten raced years ago when Power Stocks struggled to get a good car count at Elko Speedway. Now the field is large every week, 22 cars raced on Saturday night,”this is a great class with lots of great guys to race with” said Doten. Doten has taken the point lead by 17 points over Oxborough in the standings.

A strong field of twenty two cars raced in the 1250cc motorcycle motor powered race cars in the Legends divsion. Brockhouse is the fourth different winner in the five races so far in 2015. Rhode is the point leader by 10 over Allen, with Derek Lemke in third only 12 points out.

Justin Schelitzche from Lester Prairie (MN) won for the second week in a row in the Hornets division. Schelitzche took advantage of a late restart to pass Alex Vincent for the win by .297 seconds. Schelitzche is also the point leader with a 27 point advantage over Ashley Bell in the standings.

Get full results by going to http://www.ElkoSpeedway.com and click RESULTS.

After the racing the crowd was entertained by two incredible stunts. In the first time back since recovering from a injury, Jennifer Schneider better know as Cannon Lady, was shot out of a cannon over 127 feet through the air into a net. Her husband Radical Rob cut short his stunt man career to travel with Jennifer and perform his TNT stunt, he enters a box and blows himself up with a stick of dynamite. Both stunts were performed flawlessly and the Eve of Destruction crowd was not disappointed.