Bros Can Sell Sports Bras Easily According to Zensah® 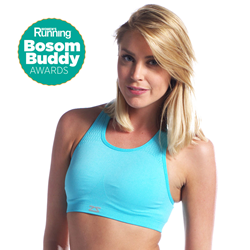 By making the video over the top, it gives men something to laugh about and makes the idea of selling bras less intimidating.

Zensah, the athletic compression apparel company, has recently launched a “Bros Sell Bras” campaign to drive sales of sports bras in Running Specialty Stores. With the use of seamless compression technology, Zensah has established itself as a strong presence in the running industry.

Although women love Zensah’s Sports Bras, men working at specialty running stores often feel uncomfortable selling bras to female customers. According to Running Insight Magazine, $11.5 billion is spent on women’s activewear each year. This emphasizes how important it is that men are able to market athletic apparel to women. To give men more confidence in selling sports bras, Zensah has developed a new campaign titled “Bros Sell Bras.” As part of the campaign, Zensah designed an informational packet including tech info, features, and key questions related to the bras. The packet even comes equipped with conversation starters to eliminate uncomfortable or awkward situations. Men can become more knowledgeable about Zensah’s Sports Bras, and feel more comfortable educating women on the benefits.

Another key component of the “Bros Sell Bras” campaign is an entertaining video that shows a “bro” helping a female customer go through the full shopping experience at a Running Specialty Store. While taking a comedic and quite exaggerated approach to the sales process, the video emphasizes the importance of qualifying customers, communicating the right questions, and shows that men can make an uncomfortable situation more acceptable.

Marketing Director, Suzanne Kerpel, explains, “By making the video over the top, it gives men something to laugh about and makes the idea of selling bras less intimidating.”

Sales rep at Runner’s Depot Aventura, Alon Velasco says, "I'm not exactly the biggest 'bro’ but the video made me laugh! And I think the video will really help men feel more comfortable with selling sports bras."

Zensah’s sports bras have taken running apparel to a new level, and have received positive feedback from the running community. The company currently offers sports bras in two styles: the Seamless Running Sports Bra and the Racey Sports Bra. Women’s Running Magazine awarded both styles with the Bosom Buddy Award. In 2014, the Seamless Running Sports Bra was the #3 selling sports bra according to Leisure Trends Group Specialty Running RetailTRAK. Both running sports bras can be found in running specialty stores across the country.