When Steve Wald, his sons, and a friend went to the pool one summer day, they did not realize they would be caught in storm. They are working with Safe Electricity to share their story to increase awareness about storm and downed line safety. 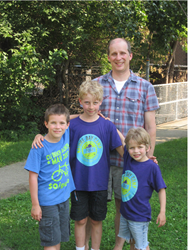 You may not see it. You may not hear it. But if you see a downed line, assume it’s hot and stay very far away from it.

It was one of those hot, sultry summer days, and all Steve Wald could think of was taking a dip in the pool. So Steve, his two sons – Jesse and Peter – and their friend, Daniel, hopped on their bikes and headed to the local pool at Crystal Lake Park.

“We finally hit the water,” Steve says. “About three minutes later, someone heard thunder, and the pool was cleared for a mandatory half hour.”

The pool’s policy is to remain closed for a half hour after thunder is heard or lightning is seen. As the half hour was about to wrap up, there was another sound of thunder from an approaching cloud system. The lifeguards blew their whistles and announced the pool would be closed for another half hour.

Steve and the boys then decided to just head home, having no idea they would end up only seconds away from being in an accident with an overhead power line brought down by the force of a storm that day. On the bike ride back, only three blocks from home, they found themselves caught in a storm.

“The second storm was moving in pretty rapidly, and the sky was getting very, very dark,” Steve recalls. “I remember being a little bit nervous…and I realized that it was likely that we were going to be caught by the storm on the way home.”

“It felt like everything suddenly grew very cold,” Daniel remembers. “What happened afterwards was amazing and terrifying.”

With a flash of light, a power line came crashing to the ground along their path home, just down the street from where the boys were.

“There were some spectacular explosions and spark fountains,” Daniel explains. “The smoke drifted by. It smelled terrible. Not like normal smoke…very metallic.”

Steve immediately took the boys to a nearby friend’s house for shelter, knowing it was safer inside. “Getting caught in the storm really did turn out to be a risk, and if our timing was a little bit different…,” Steve reflects. He shudders to think of what could have happened to himself and his loved ones that day.

Steve, Jesse, Peter, and Daniel know the situation could have ended tragically and are working with Safe Electricity to help keep others safe. Steve and the boys urge everyone to:

Don’t be caught outside in a storm. Check weather forecasts and know the difference between weather related terms. Watch forecasts on the television, listen to the weather on the radio, or download an app for a mobile device to keep forecasts at hand.

To help prevent getting caught outside in a storm, any outdoor activity or event scheduled should have a backup inside location as a precaution in case a storm threatens.

There is no safe place outside during a storm. If inside when a storm strikes, stay inside. If outside, find an enclosed building or a vehicle with a hard-top roof to take cover.

During a storm, it is possible for power lines to come down, but remember, just because a power line is down, does not mean it is out. Power lines can still be live after having fallen to the ground, and a person can still be electrocuted without touching the wire.

Fallen power lines could electrify a chain link fence, a vehicle, or the road. Electricity always looks for a path to ground. Don’t be that path. There doesn’t have to be arcs and sparks for the danger to be deadly.

“You may not see it. You may not hear it. But if you see a downed line, assume it’s hot and stay very far away from it,” Steve warns.

Don’t take chances with safety. Don’t get caught in a storm. Learn more and see Steve, Jesse, Peter, and Daniel’s story at SafeElectricity.org.