Over half of all fired or laid-off professionals reported their termination or layoff negatively impacted their perception of their employer. 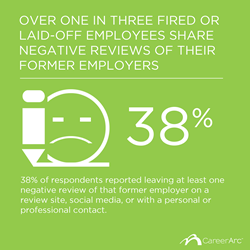 “With the quit rate now near pre-recession levels, an employer’s brand is more important than ever, and the companies that know how to protect their reputation in the social era will earn and keep the best talent." - Robin D. Richards, CEO of CareerArc.

Companies who plan to terminate or lay off employees may also need to plan for potential backlash.

According to the 2015 Employer Branding Study, published today by CareerArc—a global HR technology provider of social recruiting and outplacement services—over one in three respondents who have been terminated or laid off had left one negative review of that former employer on a review site, social media, or with a personal or professional contact. The survey also found that 54 percent of those who have been let go at least once in their career reported that the layoff or termination had negatively impacted their perception of their previous employer.

“Involuntary separations are inevitable in any organization. However, what has changed in just the past decade is the number of ways employees can share their opinions of employers and influence public perception,” said Robin D. Richards, CEO of CareerArc. “With the quit rate now near pre-recession levels, an employer’s brand is more important than ever, and the companies that know how to protect their reputation in the social era will earn and keep the best talent.”

Participants in the study included more than 1,300 job seekers and 218 HR and talent acquisition professionals representing employers of all sizes, the majority of which were companies of 500 or more employees.

Millennials Are More Jaded By, and More Vocal About, Being Let Go

Among those whom were once laid-off or terminated, Millennials were slightly more inclined than Baby Boomers to both hold and share negative opinions about their former employers. Although almost 2.5X more Baby Boomers (64 percent) than Millennials (26 percent) reported having been laid off or terminated once in their careers, 58 percent of those Millennials reported their perceptions of their previous employers’ brands were negatively impacted from the separation event, compared to 52 percent of Baby Boomers.

Furthermore, 73 percent of Millennials who reported being negatively impacted by the termination or layoff shared their negative views on social media, review sites, and with personal and professional networks, compared to 70 percent of Baby Boomers.

Job Seekers Expect Employers to Have a Strong Online Presence

Upon hearing of a job opportunity, a majority of the job seekers (52 percent) seek out an organization’s online properties first, such as websites and social media channels, to learn more about the employer’s brand identity and company culture. However, findings suggest that this crucial first impression must meet candidates’ standards: 91 percent viewed poorly managed or unattractive websites and social media channels as damaging to employer brand.

Below is a list ranking the first go-to sources job seekers turn to when evaluating employer brands:

Although employer review sites rank third on this list among first, go-to sources for employer brand insight, 82 percent of job seekers reported they were likely to visit review sites in the course of researching an employer’s brand.

Facebook and LinkedIn topped the list of social media platforms job seekers would likely visit to learn more about an employer’s brand identity and company culture.

The percentages below reflect the amount of job seekers who reported they were likely to visit the specified social media platform to learn more about an employer’s brand.

More survey participants rated negative reviews of a company’s products and services to be more damaging to an employer’s brand than negative remarks left on employer review sites.

Below is a list ranking what job seekers perceived as most damaging to employer brand; the percentage reflects the amount of respondents who found each negative attribute as either very damaging or extremely damaging.

Seventy-two percent of workers reported that not being notified of the status or decision made on their application leaves a negative impression of that employer. The survey found that over a third (36 percent) of employers admitted to never notifying applicants, even though 76 percent of employers knew it likely left a bad impression among candidates.

What Do Job Seekers and Employees Value Most in Employers?

Working professionals, across generations and employment statuses, reported that employee treatment--which includes company culture, work flexibility, health and wellness programs, etc.--was the most important factor in considering employer brand, followed by honesty and transparency. These qualities ranked above career opportunities, corporate social responsibility programs, and strong brand recognition and popularity; strong brand recognition and popularity was deemed by employees and job seekers as the least important factor on the list.

93 Percent of Organizations Either Plan to Increase, Continue, or Begin Their Investment in Social Media to Promote Employer Brand

For companies with 500 or more employees, that percentage ticks up to 95 percent. Fifty percent of employers said they were likely to increase their social media investment--be it in time, money, and/or human resources--within the next year.

CareerArc is the leading HR technology company helping business leaders recruit and transition the modern workforce. Our social recruiting solution—TweetMyJobs—and our modern outplacement solution—CareerBeam—help thousands of organizations, including many of the Fortune 500, solve critical business issues with 21st century tools and technology. By leveraging the cloud, running on world-class infrastructure, and combining web, mobile and social media applications, we help companies gain a competitive edge in recruitment, employment branding, and benefits.