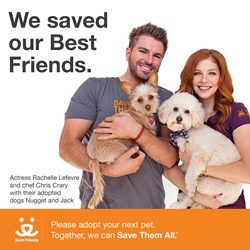 We cannot imagine a greater bond than one built on mutual gratitude. We gave our dogs a forever home and in return they have given us a friendship we will cherish forever

She stars in the summer blockbuster series based on a Stephen King novel; he is one of Hollywood’s hottest young culinary stars. Together Rachelle Lefevre and Chris Crary are bound by their love for each other and their adopted rescued dogs. Now they want the rest of the country to feel the love that comes from saving a life.

Lefevre stars in “Under the Dome” which returns to CBS on June 25. She is in steady demand for a wide range of starring movie roles including recent films “Reclaim,” “White House Down,” and “Homefront.” Lefevre became an internationally known actress when she appeared in the first two installments of “The Twilight Saga” (Twilight and New Moon), winning her a Teen Choice Award for Best Villain in 2010.

Chef Crary was already rapidly establishing himself as a culinary star when he gained national exposure for his seasonal California cuisine by joining the cast of Bravo’s “Top Chef: Texas” in 2011 and was named Season 9’s “Fan Favorite.” Crary’s current culinary endeavor is serving as Executive Chef of sbe’s Hyde Sunset Kitchen + Cocktails where he shares his specialty of light California fare with Italian, Asian, and Spanish influences to create a whimsical and memorable dining experience.

In their home life Lefevre and Crary share a passion for helping animals. In a joint statement they said:

"No single decision has impacted our lives as positively as the choice to adopt our dogs from a shelter. Rescuing an animal is one of the most rewarding things you can ever do, and we are repaid daily in unconditional love. We cannot imagine a greater bond than one built on mutual gratitude. We gave our dogs a forever home and in return they have given us a friendship we will cherish forever."