In the wake of the US Supreme Court ruling on marriage equality, the owners of PurpleUnions.com, one of the few remaining gay-owned, gay wedding vendor directories, are offering a free listing option to wedding vendors worldwide. 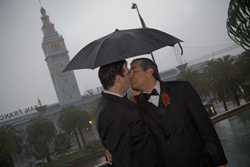 "We wanted to give something back to the community that's been so supportive of us over the years. We've faced discrimination ourselves in the past, and want to help other couples like us plan their celebration without fear or embarrassment."

Purpleunions.com, launched in 2003 and one of the only remaining gay-owned same sex wedding vendor directories on the web, is celebrating today's marriage equality ruling from the US Supreme Court by offering a free listing option to vendors worldwide who want to work with same sex couples.

"We wanted to give something back to the community that's been so supportive of us over the years," Coatsworth said. "We've faced discrimination ourselves in the past, and want to help other couples like us plan their celebration without fear or embarrassment."

Coatsworth and Guzman been together for more than twenty three years, and were one of the last couples to marry in 2005 at San Francisco City Hall, before the state Supreme Court shut down Gavin Newsom's weddings. "It was rough," Guzman said of the days that followed. "Our wedding day was such an amazing moment, and to have the Court take away our marriage license was heartbreaking."

The couple re-married in 2008, just days before voters passed Prop 8, which took away marriage rights from same sex couples, and have been legally married ever since. They have been fighting for the rights of all gay and lesbian couples to marry, partnering with Marriage Equality USA and publishing daily reports on their Marriage Equality Watch blog.

"Prop 8 created two categories of gay and lesbian couples in California – those who got in under the wire and married, and those who were banned from marriage. It was clearly, patently unfair, as were the other marriage equality bans around the country," Coatsworth said. "We've dedicated the last seven years of our lives to reporting from the front, hoping to change things for the better."

Now that gay marriage is here to stay, the couple vows to continue the fight for employment and housing rights, and for the rights of the whole LGBTQI rainbow. "It's not over until everyone in the community has equal rights," Coatsworth said.

And what's next for Purple Unions? "We hope it continues to grow and thrive," Guzman said. "There are other wedding vendor directories out there that cater to the LGBT community, but most are run by large corporations. We believe there will always be a place for a community-based site that's gay founded, gay owned and gay operated."