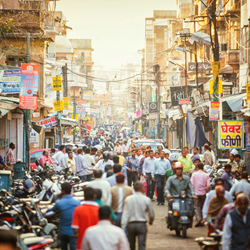 ‘I am delighted that the One Additional Line has been adopted in India,’ said Professor Suzuki, ‘This simple and small facility which has little cost to companies’ administration will radically change the lives of countless people in the country.

A new, additional line in financial reporting that demonstrates a company’s corporate social responsibility contribution, could radically change the way businesses operate, according to Tomo Suzuki, Professor of Accounting and Sustainability Management at Saïd Business School, University of Oxford.

The additional line appears on a company’s Profit and Loss Account under expenses, as an independent item which reads ‘CSR Expenditure’. It discloses the amount of money being given to corporate social responsibility. The disclosure has very little cost and can promote a positive sense of competition between companies to do more around corporate social responsibility.

Companies that meet certain financial criteria such as a net worth, turnover or net profit of at least Rs 500 crore, Rs 1,000 crore and Rs 5 crore, respectively, have to comply with One Additional Line. They must spend at least 2% of the average net profits made during the previous three financial years on CSR and if they cannot pay, they must explain the reasons in their financial reporting.

‘I am delighted that the One Additional Line has been adopted in India,’ said Professor Suzuki, ‘This simple and small facility which has little cost to companies’ administration will radically change the lives of countless people in the country. We could see huge improvements in healthcare, education and sanitation in some of the poorest areas. Because the One Additional Line, being the simple disclosure requirement, is administratively easy, politically neutral and effective in raising money for both companies and stakeholders, other emerging countries are also considering developing a similar scheme.’

16,000 companies came under this scheme in India and billions of dollars have already been generated in its first year ending 31st March 2015. A great deal more money is expected to be generated in the future for socially disadvantaged people. The companies which spend appropriate CSR expenditure are recognised by the market which raises their reputation, opportunities and capital.

Professor Suzuki added: ‘The advantage of the One Additional Line is that once a country implements the scheme, and starts to attract funds, other competing economies may choose to follow the same scheme in order to compete internationally. I am currently in consultation with representatives in Brazil, China, Thailand, Vietnam and other countries about the scheme and how it could radically increase corporate social responsibility while enhancing corporate reputation and international finance opportunities.’

Professor Suzuki ’s recommendations for the line were based on his paper ‘Institutional Mechanism Design of Corporate Socio-Environmental Data for Sustainable Growth in Developing Countries - Theory and Practice (Tomo Suzuki, 2013)’, and was tested through research, experimental accounting and analysis of the political economy between Government and business.

Research was done on four companies, two from India which included the additional line in their financial reporting and two from China which didn’t have the line. The results showed that investors favoured the companies in India more, even though their profits were less due to additional CSR expenditure.

The line is also key for the Indian government to further develop data systems which can be utilised to allocate appropriate resources to education, sanitation and healthcare and help to achieve India’s sustainable growth. Professor Suzuki and Geetnjali Gaur have already submitted a paper to the Indian Government on this subject titled ‘The Further Development of India’s CSR Policy: Review and Proposal from the Institutional Mechanism Design Point of View.’

Tomo Suzuki is Professor of Accounting and Sustainability Management at the University of Oxford. He is one of the leading experts of accounting and financial regulations to promote CSR activities and sustainable development. He is also an advocate of the long-term investment practices which enables epock-making innovations and sustainable growth. He uses the Institutional Mechanism Design method to develop pragmatically feasible schemes for profitable, yet socially sustainable businesses.

Saïd Business School at the University of Oxford blends the best of new and old. We are a vibrant and innovative business school, but yet deeply embedded in an 800 year old world-class university. We create programmes and ideas that have global impact. We educate people for successful business careers, and as a community seek to tackle world-scale problems. We deliver cutting-edge programmes and ground-breaking research that transform individuals, organisations, business practice, and society. We seek to be a world-class business school community, embedded in a world-class University, tackling world-scale problems.

In the Financial Times European Business School ranking (Dec 2014) Saïd is ranked 10th. It is ranked 10th worldwide in the FT’s combined ranking of Executive Education programmes (May 2015) and 22nd in the world in the FT ranking of MBA programmes (Jan 2015). The MBA is ranked 7th in BusinessWeek’s full time MBA ranking outside the USA (Nov 2014) and is ranked 5th among the top non-US Business Schools by Forbes magazine (Sep 2013). The Executive MBA is ranked 21st worldwide in the FT’s ranking of EMBAs (Oct 2014). The Oxford MSc in Financial Economics is ranked 14th in the world in the FT ranking of Masters in Finance programmes (Jun 2015). In the UK university league tables it is ranked first of all UK universities for undergraduate business and management in The Guardian (May 2015) and has ranked first in nine of the last eleven years in The Times (Sept 2014). For more information, see http://www.sbs.ox.ac.uk/