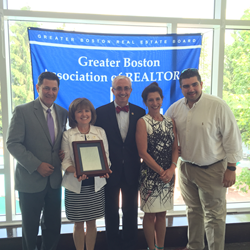 Kathy Harney accepts her Affiliate of the Year Award from the Greater Boston Association of Realtors executives.

Being named GBAR's Affiliate Member of the Year was an unexpected, but truly exciting moment in my career.

Gentle Giant Moving Company, the Boston headquartered full-service moving and storage company, is proud to announce that their Community Relations Specialist, Kathy Harney, has been recognized by the Greater Boston Association of Realtors (GBAR) as the Affiliate Member of the Year Award Winner.

The GBAR Affiliate Member of the Year Award acknowledges the involvement of industry, product, and service providers for their active participation in GBAR programs, activities, and their support of its mission and the REALTOR® membership. Nominees are judged on volunteer service and personal contributions made in support of the association’s strategic objectives and programming, which may include charitable and community service activities, public policy advocacy, committee service, sponsorships, and support of the REALTORS® Political Action Committee and the Greater Boston Real Estate Board’s PAC.

“Being named GBAR’s Affiliate Member of the Year was an unexpected, but truly exciting moment in my career,” Harney explained. “I am thrilled to be able to represent Gentle Giant at GBAR, and I love all the people I get to work with in both organizations.”

The Greater Boston Association of Realtors® is a private trade association with more than 7,200 Realtor® members who specialize in residential real estate in Eastern Massachusetts. GBAR is the largest of five divisions of the Greater Boston Real Estate Board (GBREB).