A recent US Geological Survey on polar bear habitat is not supported by evidence in a report entitled “The Arctic Fallacy” by Dr. Susan Crockford, evolutionary biologist and adjunct professor of the University of Victoria, says Friends of Science Society. Crockford says the sea ice models predict no decline in winter sea ice and only slight declines in spring sea ice, the seasons when polar bears need ice the most for denning, feeding and mating, but when modelers talk about "sea ice" they mean "summer sea ice" which can be misleading for non-experts. 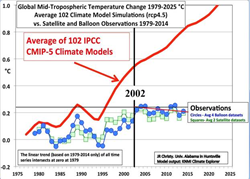 polar bears consume about 2/3rds of their annual food intake in the spring and far from suffering on a small floe of ice, as often pictured by environmental groups, polar bears are great swimmers

CBC News reported on July 2, 2015 that a US Geological Survey says “Canada's High Arctic could become the last stable refuge for polar bears” citing climate change due to human-caused greenhouse gas emissions as a factor, but Friends of Science dispute this claim pointing to “The Arctic Fallacy” a research study on polar bears published June 8, 2015, by the Global Warming Policy Foundation.

Author Dr. Susan Crockford explains that fluctuations of arctic ice are linked to natural variabilities of atmospheric oscillations like the Atlantic Multidecadal Oscillation.

Crockford said: “The assumption that Arctic sea ice is a naturally stable habitat over short time frames is a biological fallacy. Predictive population models based on this myth are flawed, their results illusory.”

Crockford’s report indicates that polar bears consume about 2/3rds of their annual food intake in the spring and far from suffering on a small floe of ice, as often pictured by environmental groups, polar bears are great swimmers.

According to Crockford’s report the International Union for the Conservation of Nature and the US government have accepted modeled (future) population declines of Arctic species based on modeled (future) summer sea ice changes as valid threats to their survival, but Crockford argues this is “all built upon this fallacy.”

Crockford’s paper indicates that contrary to popular opinion, "Polar bear population declines that were clearly caused by thick sea ice conditions in spring are now blamed on summer sea-ice declines.” She says this is due to the fact that the polar bears' prey, the ring seals, are better protected by the thicker ice.

Crockford says: “Many of the effects of a longer open-water period have been unexpectedly positive for polar bears. For example, polar bear condition and reproduction in the Chukchi Sea (between Russia and Alaska) was much better over a recent period with a long open-water season than it was in the 1980s, when there was a short open water season. Ringed seals flourished during the recent long open-water sea, so they had a longer time to feed and consequently reproduced well.”

“Given what we now know about the animals and their naturally changing habitat, it is time to concede that the data does not support predictions that polar bears, walrus, and Arctic seals are threatened with extinction due to habitat instability,” said Crockford.

Crockford’s report refers to the work of ecologist Daniel Botkin : “The idea that nature can be restored to a single best condition is also part of a modern nature-myth, the belief in nature as a machine….”

Friends of Science Society point out that for 18 years and 6 months Remote Surface Sensing satellite monitors have shown that global temperatures have flat-lined with little change in surface temperatures, despite a significant rise in carbon dioxide, meaning aspects of the theory of Anthropogenic Global Warming, especially model predictions, are in question.

This view is supported by a June 20, 2013 interview with Hans von Storch in Der Speigel in which he is quoted as saying: " If things continue as they have been, in five years, at the latest, we will need to acknowledge that something is fundamentally wrong with our climate models. A 20-year pause in global warming does not occur in a single modeled scenario."

Consequently Friends of Science says that making policy decisions to the year 2050 based on predictive models that have failed to forecast this stagnation seems very unreliable, particularly when there is clearer evidence that natural forces are more influential than human carbon dioxide emissions.