Dade Moeller senior health physicist (radiation protection specialist) James S. Bogard has been elected to a 3-year term as a member of the Health Physics Society board of directors. 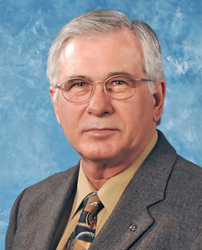 Dade Moeller senior health physicist (radiation protection specialist) James S. Bogard has been elected to a 3-year term as a member of the Health Physics Society board of directors. After a yearlong understudy period, he will become director of the board’s efforts on “Science Support and Sound Practice of Radiation Safety,” serving as a liaison with the society’s power reactor and accelerator sections; the international collaboration, nanotechnology, science support, and standards committees; and the Arizona, Mid-America, North Central, Northern California, and Southern California chapters.

From Dade Moeller’s Oak Ridge, Tenn., office, Bogard supports federal and commercial consulting projects involving radiation dose reconstruction, environmental remediation, homeland security, nuclear material accountability and control, and industrial use of radiation and radiological materials. He also serves as the radiation safety officer for Dade Moeller’s radioanalytical and calibration laboratory in Oak Ridge. Additionally, Bogard is an adjunct faculty member at the University of Tennessee at Knoxville and is a distinguished alumnus of Texas State University.

Prior to joining Dade Moeller in 2011, Bogard worked for 26 years at the U.S. Department of Energy’s Oak Ridge National Laboratory, primarily in nuclear safeguards technology research and personnel radiation dosimetry. He is a certified health physicist with a doctorate in physical chemistry from the University of Texas at Austin and has co-authored two books on health physics, "Problems and Solutions in Radiation Protection" (Pergamon Press, 1988) and "Statistical Methods in Radiation Physics" (Wiley-VCH, 2012). He served as president of the American Academy of Health Physics in 2006 and was named a fellow of the Health Physics Society in 2008.

Bogard was elected to the Health Physics Society board on July 12 at its annual meeting in Indianapolis. He joins fellow Dade Moeller senior health physicist Tracy Ikenberry, who was elected to the board in 2013 and is serving his last of a 3-year term. The Health Physics Society is a nonprofit scientific professional organization established in 1956 to promote the practice of radiation safety.

PRESS RELEASE: James Bogard Elected to HPS Board of Directors