New Survey Reveals What Entrepreneurs Need Most from Cloud-Based Services

The Alternative Board’s new survey shows that security isn’t as big of a factor as functionality for businesses deciding to migrate to the cloud. 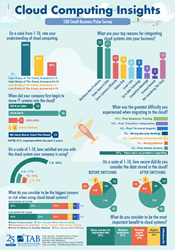 "Small business owners are less concerned with data breaches that might set them back than streamlined systems that can move them forward." - David Scarola, Vice President, The Alternative Board

“Small business owners are less concerned with data breaches that might set them back than streamlined systems that can move them forward,” says David Scarola, Vice President of TAB. “This is a valid concern, considering business owners ranked poor employee training, poor transition/integration, and poor technical support above security as top challenges they faced when upgrading to cloud services.”

The top response to why business owners seek out cloud-based systems, such as Dropbox, Microsoft Office 365, and Google Drive, is to make the workplace more mobile and productive (more than double the response to "reduce risk"). When seeking out new cloud technologies, business owners are most concerned with a highly functional, intuitive service that supports that goal.

Hesitation also comes in the form of integrating new technologies into the workplace. Twice as many business owners chose "poor transition/integration" over "too little/too much security" as the greater difficulty when implementing cloud technologies. Business owners are barely more concerned with data compromises than they are losing access to data when internet issues arise.

"We intend to increase our cloud spend in 2016. As a small business, with a team that spends most of their time in the field, having our applications in the cloud gives us flexibility and protection,” says Koch. “We can collaborate together, get documents wherever we are, and we don't have to deal with managing servers.”

The full survey results along with a detailed infographic are available at The Alternative Board website. For more information, or to schedule an interview with David Scarola, contact Lynn Maleh at lynn(at)contentfac(dot)com.