The Left Bank Writers Retreat is offering a $200 discount off its new first-ever fall session in Paris, scheduled for Oct. 18-23, 2015, for writers who sign up by Aug. 1. Now in its sixth year, the Left Bank Writers Retreat combines a small-group, salon-style writing workshop with literary tourism visiting museums, cafés and gardens, including sites frequented by the famous writers and artists of the early 20th century. 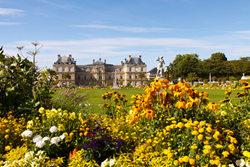 The Left Bank Writers Retreat will return to Paris in October to inspiring writing spots such as the Luxembourg Gardens in its fall colors this October (photo by Richard McGuirk).

We will explore the Left Bank Writers in Paris during the 1920s, when such literary greats as Hemingway, Stein, Pound and Fitzgerald were sharing ideas around café tables.

The Left Bank Writers Retreat in Paris is offering an early-bird discount on registrations received by Aug. 1, 2015, for its first fall session, scheduled for Oct. 18-23, 2015, in Paris, France. With the discount, tuition for the small-group Paris writing workshop is $1,799 (regular price is $1,999). The six-day literary retreat is open to all levels of writers and includes morning writing sessions, coaching and one-on-one time with the instructor for a maximum of eight writers, as well as lunch each day, admission to museums and area sights, an excursion to Montmartre and a literary tourism experience visiting many of the sites featured in the Woody Allen movie “Midnight in Paris” and Hemingway’s famous “A Moveable Feast.”

Like the Left Bank Writers Retreat’s popular June session, which recently wrapped up, the fall writers’ workshop will combine writing sessions in various significant Paris venues with lunch at Parisian cafes favored by Hemingway and his friends and the tour of sites and landmarks significant in Paris’s literary legacy.

“We will explore the Left Bank Writers in Paris during the 1920s, when such literary greats as Hemingway, Stein, Pound and Fitzgerald were sharing ideas around café tables,” says Darla Worden, founder and director of the Left Bank Writers Retreat. “If the weather is cool, that will give us more time to sip a fine a l’eau in the tradition of those writers, next to terrace heaters to stay warm. The Luxembourg Gardens will be quite different in the fall, and travel costs should be lower and landmarks less crowded than in the busy summer season,” she adds.

Featured in the L.A. Times, which suggested, “Cure your writer’s block and draw inspiration from the sights and sounds of Paris that influenced Ernest Hemingway, F. Scott Fitzgerald and others on a Left Bank Writers Retreat,” the Paris writing workshop – now in its sixth year – is known for sparking the creative muse. “Writers tell me that the retreat works magic for them,” says Worden of the Left Bank Writers Retreat experience, which she captured a bit of on an unintentional video she made in June 2014. “We’re in Paris, writing, eating and drinking wine—writers come back home rejuvenated.”

The retreat welcomes fiction and memoir writers, poets and playwrights. Writers wishing to join the retreat will find an application on the registration page at http://www.leftbankwriters.com. “I like to see what a writer is hoping to accomplish while they are in Paris to make sure we are the right retreat for their expectations,” says Worden.

The Left Bank Writers Retreat facilitator and host Darla Worden is a writer and public relations professional who lives in Jackson, Wyo., Denver, Colo., and Paris. She has written widely for magazines and authored several books. She writes the popular blog Frenchophile and is currently working on a book about Hemingway’s Paris.

About the Left Bank Writers Retreat:
Now in its sixth year, the Left Bank Writers Retreat takes place on the historic Île Saint-Louis in the heart of Paris each June – and recently announced its first fall session, set for Oct. 18-23, 2015. Writers arrange their own lodging and transportation to Paris. For additional information, visit http://www.leftbankwriters.com.

For the first time the Left Bank Writers Retreat will bring its small-group writing workshop to Paris in October for a fresh fall take on the sights and sounds of Paris (Photo by Valerie Potapova).

The six-day Left Bank Writers Retreat writing workshop is open to all levels of writers and includes morning writing sessions, coaching and one-on-one time with the instructor.