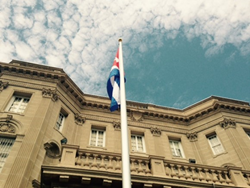 Today’s official opening of the Cuban Embassy in Washington DC and the US Embassy in Havana, signals a new era, making way for vital cooperation in health.

Medical Education Cooperation with Cuba (MEDICC) remarked on today’s official opening of the Cuban Embassy in Washington DC and the US Embassy in Havana, signaling a new era, “making way for vital cooperation in health”, said MEDICC Board Chair Dr. Peter Bourne.

He noted that significant among the 30-member delegation that accompanied Cuban Foreign Minister Bruno Rodríguez to the flag-raising ceremony in the US capital, was the presence of Dr Jorge Berlanga (developer of the Cuban biotech medicine successfully treating diabetic foot ulcers), Dr Ronald Hernández (recently returned from Cuba’s Ebola emergency medical team in Liberia) and Yunidis Castillo (world champion in Special Olympics track and field, who travels to Los Angeles for this year’s games later this week).

“They represent the clear potential and need for cooperation…at home and abroad,” said Dr. Bourne.

Dr. Pierre LaRamée, MEDICC Executive Director, referred to the Foreign Minister´s remarks at the Embassy, noting that he had praised President Obama for taking leadership in renewing ties with the island. “He also stressed that Cuba hopes negotiations will lead to respectful relations and to bilateral cooperation. For nearly 20 years, MEDICC has worked for and encouraged cooperation with Cuba for the sake of people’s health in both countries,” said LaRamée. “Now, the next step is for the United States to end the embargo against Cuba, the only way this cooperation can prosper.”

Since 1997, MEDICC has worked to enhance cooperation among the US, Cuban and global health communities aimed at better health outcomes and equity. MEDICC produced the feature film ¡Salud! and publishes the MEDLINE-indexed journal MEDICC Review. MEDICC supports research in Cuba by US health professionals, assists US students and graduates of Havana’s Latin American Medical School to return to US underserved communities, and organizes Community Partnerships for Health Equity to improve health care and access in communities such as South Los Angeles and Oakland, California; Albuquerque, New Mexico; The Bronx, New York; Milwaukee, Wisconsin; and Summit County, OH. See: http://www.medicc.org and http://www.medicc.org/mediccreview