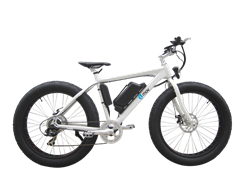 [The Electric Fat Bike] has built upon the classic version by adding an electric motor with a chargeable battery, and is offered with a wealth of innovative features.

Umov Technologies, a maker of electric bicycles, has taken a novel approach to getting their latest innovation on the road. The company’s Electric Fat Bike, an environmentally-friendly all-terrain model, is being offered to early adopters through Kickstarter. A popular crowdfunding platform, Kickstarter is used by start-ups around the world to get funding for their work by offering tiered rewards to their backers. In the case of Umov, the reward is simple: a fantastic offer on the Electric Fat Bike, with a basic configuration available for $999, and a premium version for $1,199. The typical suggested retail value for such a bike is $2,300.

The Fat Bike is named for its 4” wide tires that provide greater traction in snow and sand than traditional bicycles. While similar manual bicycle have been popular for several decades in northern climates, where they are commonly used to ride through compacted snow trails, this particular model has built upon the classic version by adding an electric motor with a chargeable battery, and is offered with a wealth of innovative features. The motor can be used to add an assistive boost to traditional pedalling, or can be used on its own to propel riders forward, and can run at 30 kilometres per hour. When full, the battery provides 50 to 60 km of autonomy on a single charge. The basic configuration offered at $999 (limited to 20 units) is available in six colours and includes a 250-watt electric motor with a 36-volt lithium-ion battery. It also includes a 5-speed assistance selector, and the option to add a throttle (which allows the bike to operate like an electric scooter). The premium configuration, which costs $1,199 through the Kickstarter campaign, features a 500-watt motor and a 48-volt battery.

An option to buy five Electric Fat Bikes for $5,500 is also available through the campaign, and backers may increase their pledge to add additional features to their electric bicycle, such as fenders, a rear rack, an LCD display, and an extra battery.

The Kickstarter campaign continues until Saturday, August 15, 2015. If $100,000 is raised by that date, manufacturing will begin. Once completed, the bikes will be shipped to the campaign’s backers starting on November 15, 2015. To see the Kickstarter campaign and become a backer, visit https://www.kickstarter.com/projects/2068720774/the-best-and-most-affordable-electric-fat-bike-yet/.