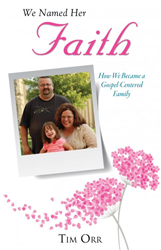 We Named Her Faith

My book is newsworthy because it addresses the problem of alcoholism, suicide, and abuse, and shows how these problems can be overcome through the power of the Gospel.

The new book, We Named Her Faith: How We Became a Gospel-Centered Family ($20.99, paperback, 9781498431613; $4.99, e-book, 9781498431620), shares the personal story of author Tim Orr and his wife, Michelle Orr, and how they believe God prepared them to be their adopted daughter’s parents through the life-transforming power of the Gospel. When they adopted a young girl with Down syndrome, their faith was tested in a way they never dreamt was possible, but it is through the power of God that they believe they were hand-picked to be her parents, fittingly naming her “Faith”. Tim openly shares his difficulties growing up as he struggled with living in a broken home, and how he overcame the pains of rejection and physical challenges, which eventually led him to alcohol addiction. Tim’s life changed, however, when he responded to the life-changing message of the Gospel.

“My book is newsworthy because it addresses the problem of alcoholism, suicide, and abuse, and shows how these problems can be overcome through the power of the Gospel,” states the author. “I hope that the reader will understand how the Gospel can change a life and how it can transform a family.”

Tim Orr is an award-winning adjunct faculty member in Religious Studies at Indiana University Purdue University Columbus, where he has served for over seven years. His dramatic conversion and subsequent life change has been featured on Pat Robertson’s 700 Club. Tim has served as a pastor, church planter, and also has a heart for building bridges with the Muslim community. His greatest joys in life, however, are being a husband to Michelle and a father to Faith.

Xulon Press, a division of Salem Media Group, is the world’s largest Christian self-publisher, with more than 12,000 titles published to date. Retailers may order We Named Her Faith: How We Became a Gospel-Centered Family through Ingram Book Company and/or Spring Arbor Book Distributors. The book is available online through xulonpress.com/bookstore, amazon.com, and barnesandnoble.com.