In an effort to support Colleen’s Dream Foundation, motorcyclist, Chris Mengel, will ride his Goldwing Motorcycle from Charlotte, NC, to Phoenix, AZ, to raise funds and awareness for ovarian cancer research. 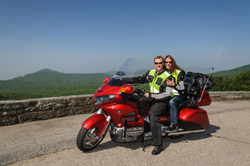 Chris Mengel will ride over 2,000 miles to raise funds and awareness for ovarian cancer research.

I decided I wanted to do something different. When I learned that Colleen once rode a Goldwing, that got my wheels turning - literally." Chris Mengel.

To support Colleen’s Dream Foundation in their fight against ovarian cancer, motorcyclist, Chris Mengel, will ride his Goldwing Motorcycle over 2,000 miles to raise funds and awareness for ovarian cancer research. His ride will end in Arizona on September 26, 2015, to coincide with Ovarian Cancer Awareness Month.

Mengel, who lost his wife Ashlyn to ovarian cancer in 2013, says his ride is an effort to do something about the disease that had such a terrible impact on his life; and the life of someone he loved.

"Ashlyn was an amazing woman,” says Mengel. “She was a loving and devoted wife, a caring and nurturing mother, an amazing pianist and organist, she had a tremendous heart for God, and a beautiful, strong and rich faith that enabled her to faithfully serve throughout her treatment. We often dreamed about traveling together later in life, so this seemed like a fitting way to honor her.”

Click here for more about Chris Mengel’s ride, or to make a tax deductible contribution to his effort.

Mengel said he recently found out about Colleen’s Dream Foundation from the family of his new wife, Kimberly. He said he decided to reach out to the organization see if there was something he could do to help in the fight against ovarian cancer.

“I spoke to Colleen’s Dream Foundation’s Executive Director Nicole Cundiff last December on Ashlyn's birthday,” says Mengel. "Nicole and I had a wonderful conversation. I enjoyed learning about Nicole’s mother, Colleen Drury (who passed from ovarian cancer), and her life and legacy. Nicole was very moved by my story.”

"After that conversation, I wanted to help,” says Mengel. “But I decided I wanted to do something different. When I learned that Colleen also rode a motorcycle, that got my wheels turning - literally. I spoke to Nicole and her husband, Billy, about the idea of a charity ride in September to go along with Ovarian Cancer Awareness Month and they were all in!"

Cundiff says the ride will take place on September 26, 2015 and riders will meet at 9 am for breakfast at Harold's in Cave Creek to prepare for the ride. Daniel Piacquadio, an owner of Harold's Corral, says they are honored to be part of this event.

"Harold's Corral is very proud to support Colleen's Dream Foundation and to be part of this event," says Piacquadio. "We love the dedication and commitment from this organization and what they have accomplished in a short period of time. They are making a difference!! We all have been touched by someone affected with cancer and we look forward to the day that all cancers are eliminated. We also felt this to be a perfect way to kick off Harold's 80th anniversary party.”

Cundiff says Arizona Harley-Davidson will be having a huge demo event that day - there will be live music and they will be serving lunch to all attendees.

Although this ride is in remembrance of his late wife Ashlyn, Mengel says there is one other –well actually two other- important reasons for engaging in this fundraiser: his daughters.

“I want to be an example to my daughters,” says Mengel. “I want them to see that you can accomplish big goals when you put your mind –and your heart- to them.”

Mengel says the ride will take between four and five days. His goal is to get pledges for every mile he rides up to 2,000 miles.

Click here for more about Chris Mengel’s ride, or to make a tax deductible contribution to his effort.

"The future belongs to those who believe in the beauty of their dreams." Eleanor Roosevelt.