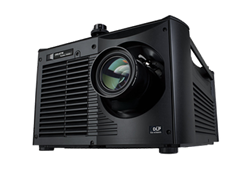 Your imagination is the only limitation with Christie technology, and our projection mapping demonstration proves that our technology allows users to put pixels anywhere

Christie®, the leader in visual and audio technologies, is proud to once again be a Platinum-level sponsor at the 42nd International Conference and Exhibition on Computer Graphics and Interactive Techniques (SIGGRAPH) taking place August 9-13 at the Los Angeles Convention Center. Christie is participating in an Emerging Technologies demonstration displaying its latest digital “sandbox.” Attendees will also see Christie projection technology in action across the conference, including lighting up BARTKRESA Design’s Shogyo Muyo 360-degree projection mapping installation.

Projection mapping in 30 seconds or less:
Attendees to SIGGRAPH 2015 will see the latest in projection mapping technology from Christie in an Emerging Technology demonstration displaying its latest digital “sandbox,” taking place in South Hall G. Using auto-calibration, Christie is taking a process that was once complicated to execute and time consuming to calibrate and scaled it down to less than 30 seconds. Attendees will see a 3D printed apartment building projection-mapped in real-time, a process for which Christie claimed two patents on June 2, 2015.

The first patent claims the invention of using cameras to “see” what is in front of the projector, sending that information to a computer, which then uses that information to determine in 3D what is being projected on. The process then identifies the objects in the scene, looks up the virtual imagery corresponding to those objects, adjusts the image to be projected accordingly and sends that adjusted image to the projector for display. When the process repeats at a sufficiently high rate, and with minimal latency, the viewer will recognize the imagery as attached to the object even if the object is in motion. Only the frame rate capability of the projector limits how quickly the image can be adjusted and projected.

The second patent claims a specific application of the general invention. The application covers scenarios where the parameters of the projected image would alter themselves in response to variations in the scene the camera sees.

“Your imagination is the only limitation with Christie technology, and our projection mapping demonstration proves that our technology allows users to put pixels anywhere,” says Roy C. Anthony, senior product manager at Christie and production sessions program chair at SIGGRAPH 2015.

Christie projection technology across SIGGRAPH:
Christie is proud to once again be working with BARTKRESA Design to present Shogyo Mujo, a 3D projection-mapped skull created in collaboration with artist Josh Harker and Theatrical Concepts. Shogyo Mujo represents the first of the three marks of the Dharma, stating that all things are impermanent, as represented in the changing projection mapping display onto the skull.

Presented as a 360-degree display onto the 12-foot skull, the projection mapping is powered by four Christie Roadster HD20K-J projectors, each delivering 20,000 lumens of light in HD resolution with built in Christie Twist™ for seamless blending between the projectors.

Christie is again lighting up screens at SIGGRAPH 2015 with its digital projection technology. Powering screens in main halls K and B for programs including Industrial Light & Magic’s 40th Anniversary Presentation and Production Sessions discussing films including “The Hobbit: The Battle of the Five Armies” and “The Peanuts Movie” will be Christie CP4230 DLP® projectors displaying content in 4K, and Roadster HD20K-J projectors, which provide the most lumens in the smallest chassis in its class.

Christie and TechViz, a provider of advanced visualization solutions for 3D applications, are partnering at booth No. 819 to display the powerful combination of the TechViz XL™ software package and the Christie Mirage 4K25 DLP® 3D projector for the first time. TechViz XL allows users to display 3D models directly from native industrial or VR applications onto a 3D display.

A breakthrough in immersive VR technology, the combination of TechViz XL software and the Christie Mirage 4K25 DLP 3D projector allows users to visualize the 3D application of their choice at a very high frame rate with high image quality and without data conversion.

Additionally, for the first time at SIGGRAPH, attendees will see the combined solution of TechViz XL software with the IPSI (Interactive Physics Simulation Interface) haptic toolkit from Haption. Displayed on a Christie® Entero® HB 72-inch WUXGA display cube, this solution demonstrates force feedback in 3D for an immersive and interactive experience in VR.

About Christie®
Christie Digital Systems USA, Inc. is a global visual and audio technologies company and is a wholly-owned subsidiary of Ushio, Inc., Japan. Consistently setting the standards by being the first to market some of the world’s most advanced projectors and complete system displays, Christie is recognized as one of the most innovative visual technology companies in the world. From retail displays to Hollywood, mission critical command centers to classrooms and training simulators, Christie display solutions and projectors capture the attention of audiences around the world with dynamic and stunning images. Visit http://www.christiedigital.com.

“Christie” is a trademark of Christie Digital Systems USA, Inc., registered in the United States of America and certain other countries.
DLP® is a registered trademark of Texas Instruments