Surmet Corp congratulates NASA and its contractors on the recent mind-boggling accomplishment, and is grateful for the opportunity to contribute the critically enabling Silicon mirror-surface technology for the LORRI telescope, which was part of the New Horizons mission. 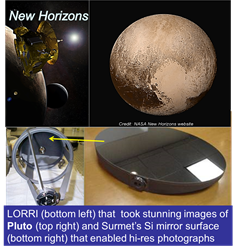 “To know that we had a critical role in helping uncover the vastness of the universe and its mysteries is indeed mind-boggling and immensely satisfying.” Dr. Sastri added with a smile.

“I am happy and proud to announce an accomplishment by Surmet that almost went unnoticed,” said Dr. Suri Sastri, President and CEO. “By now, you all are aware of the ‘out of this world’ performance of the NASA’s spacecraft New Horizons and LORRI (the telescopic camera snapping the images), that sent back unbelievably clear high-resolution pictures of Pluto and its moon from three billion miles away. What most of you are not aware of is that Surmet contributed the critically enabling mirror-surface technology for the New Horizons mission.”

Dr. Sastri was referring to the unique and proprietary Silicon coating technology that he had developed and perfected in early 2000s. Strongly adherent, amorphous and supremely homogeneous (at an atomic scale), the coating applied to the mirror substrate of the telescope allows for single point diamond turning and finish polishing, meeting the most stringent wavefront specifications required for capturing ultrahigh resolution images from outer space.

Based on its proven track record, it is not surprising that Surmet’s Coating technology continues to be in demand for current and future precision mapping and satellite imaging system applications, Google Earth mapping and other satellite images come to mind.

The New Horizons mission, launched in 2006, is the first spacecraft to Pluto and the Kuiper Belt. It has traveled for nine years to reach its milestone closest approach to Pluto on July 14th this year. The spacecraft came within approximately 7,750 miles of the dwarf planet!

“What is interesting is that this is not the first time Surmet has ventured into Space”, added Dr. Sastri. In 2003, Surmet provided the enabling UltraC diamond-like carbon (DLC) coating technology for the Titanium Cryocooler component of the Infrared imaging sensors (NICMOS) on the Hubble Telescope. The coating made possible near frictionless performance by the Cryocooler, at a super high 6000 to 8000 rpm, for years on end helping to bring in astounding images from the edge of the observable Universe.

“To know that we had a critical role in helping uncover and discover the vastness of the universe and its mysteries is indeed mind-boggling and immensely satisfying.” Dr. Sastri added with a smile. “We are grateful and humbled by the opportunity to contribute to NASA’s efforts and those of its able contractors, both large and small.”

Surmet was founded in 1982 on a simple premise that today’s materials are not adequate to meet the challenges of tomorrow’s machines and systems. Surmet, entering its 33rd year of successful operation, is a rarity among technology based small companies; to successfully transition its laboratory innovations to the production floor and deliver cost effective high performance products to its global customers.

Surmet has had many unique and significant accomplishments over the years, serving the Advanced Materials needs of next generation applications in Global Semiconductor Equipment, Biomedical, Aerospace and Defense and other industries. Surmet has its Headquarters in Burlington, MA with operating facilities in Buffalo, NY and Murrieta, CA.