Longshot Games is announcing a Kickstarter campaign for Bobblehead College Football, the only free-to-play online college football game for Facebook and iPad. 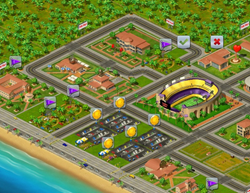 Every campus is unique

It has enough strategy and depth for hardcore college football gamers, but is still totally engaging for casual players who just want to build the best campus they can.

In Bobblehead College Football, the player builds a campus from the ground up to maximize their team’s potential. They build game-day vendors and tailgate parties to draw in revenue, use that money to buy training fields and medical centers, and upgrade their stadium to bring in the best recruits.

Once they’ve recruited and trained a team of world-class athletes, it’s time to take them onto the football field against other players from around the world. With a deep and engaging football simulation, each coach's play-calling and player selection will be tested to the limit. With every win, the player moves up through the leaderboards, as well as getting more money and fans for their team.

As a Kickstarter campaign, Bobblehead College Football offers fans a chance to influence development of a game like never before. Pledge levels include membership in the beta test, naming recruits, and early access to team names and logos.

“This is a football game for everyone,” said Josh Brown, president of Longshot Games. “It has enough strategy and depth for hardcore college football gamers, but is still totally engaging for casual players who just want to build the best campus they can."

Build Your Own Campus - Every player builds a campus according to their sense of style and strategy, placing roads, stadiums, vendors, practice fields, a Hall of Fame, and more.

Competitive Multiplayer Play - Take a team up against other players online, and crush the competition with smart play-calling.

Recruit Your Team - Compete for recruits from all 50 states against other players.