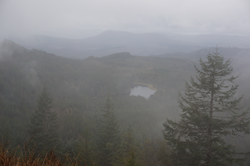 Because of this agreement, the City will be able to prioritize conservation, clean water, and forest health; benefits that translate to the citizens of Astoria.

The Climate Trust today announced that it will purchase verified carbon emission credits from the City of Astoria. Through this innovative agreement, Astoria will store greater amounts of carbon by reducing the volume of timber harvested in the city-owned Bear Creek Watershed in return for carbon credits. The City plans to only harvest about one third of the amount of annual growth in the coming decades, significantly less that what is allowed under the Oregon Forest Practices law. This new carbon revenue stream will replace foregone harvest revenue and provide critical support to Astoria’s capital improvement fund.

All of the 245,000 carbon credits purchased by The Trust will be directed to offset the carbon dioxide emissions from Oregon utilities, helping to mitigate industrial pollution that contributes to climate change. This offset purchase is equivalent to the annual greenhouse gas emissions from over 51,000 passenger vehicles.

“The City is excited about this new opportunity to derive revenue from the sale of carbon rather than increasing harvest levels to meet future financial needs,” said Arline LaMear, Mayor of the City of Astoria. “This project will benefit our citizens and the environment.”

“In the absence of carbon revenue the project activity of limiting timber harvest could not be sustained, as it is important that city assets, like the Bear Creek Watershed, generate long-term sustainable revenue for the benefit of its citizens,” said Ken Cook, City of Astoria’s Public Works Director.

By encouraging natural forest growth in Astoria’s 3,700-acre Bear Creek Watershed, the project preserves carbon stored in the forest and prevents the release of carbon dioxide into the atmosphere that results from harvesting trees. Additionally, this project protects diverse forest structure and critical wildlife habitat.

“One of the most appealing aspects of this project is that we are able to provide a financial incentive to limit harvest levels in an area that provides essential clean drinking water to the city of Astoria,” said Mik McKee, Senior Forestry Analyst for The Climate Trust. “Because of this agreement, the City will be able to prioritize conservation, clean water, and forest health; benefits that translate to the citizens of Astoria.”

The Climate Trust was founded to administer the first legislation in the nation to curb carbon emissions—the Oregon Carbon Dioxide Standard. The Oregon Standard requires fossil fuel-fired power plants to reduce or offset their emissions; providing funding for high quality projects that reduce pollution. The Trust’s projects have led to 2.5 million tons of emission reductions, the equivalent of the annual greenhouse gas emissions from over 526,000 passenger vehicles.

Astoria’s carbon offsets will seek verification under the American Carbon Registry’s (ACR) Improved Forest Management for Non-Federal U.S. Forestlands Methodology; quantifying greenhouse gas removals and emission reductions through increased forest carbon sequestration. The City of Astoria is committed to continued monitoring and verification of the project to ensure that its climate benefits persist for a period of 40 years, as required by the ACR standard.

“This is a milestone project for The Trust,” said Sean Penrith, Executive Director for The Climate Trust. “Forestry is a key sector in the state, and this is The Trust’s sole, Oregon-based forest carbon project. We’re thrilled to have the opportunity to keep Oregon Standard dollars right here in Oregon.”