Jack Kearney’s New Book “Inside Out” is an Emotional, Eye-Opening Book About a Simple Twist of Fate and Living Life Inside Out

Recent release “Inside Out” from Page Publishing author Jack Kearney is an enlightening, dramatic glimpse in the life of an “Everyman” convicted of murder. 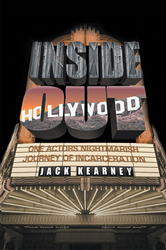 Jack Kearney, a father, former actor, graduate of the American Academy of Dramatic Arts, writer and author, has completed his new book “Inside Out”: a gripping and intriguing tale about one man’s easy-going, happy life changing into a whirl-wind of crime, death and fear.

“My experience in the late seventies inspired me to write a script in the mid¬-eighties that led me to write this book in 2013. So dreams do come true, but sometimes you have to wait for them. At sixty-three I’m proof of that,” said author Jack Kearney.

Published by New York City-based Page Publishing, Jack Kearney’s suspenseful tale will keep the reader on the edge of their seat!

As an actor, Danny Belson has played many criminal types, but as the prisoner transport bus pulls out of the LA county jail, the realization of his conviction overwhelms him. The irony is that only six months ago he taught an acting workshop at the same institution he is now going to be incarcerated in. Danny had been chosen for an experiment where he actually worked with the inmates of the Medium Security Federal Prison in Lompoc. Follow Danny as he goes from a carefree beach volleyball loving, pool-shooting, nice American guy to a convicted murderer serving his time where he already has built in friends as well as unforgiving enemies.

“Inside Out” introduces the reader to multitude of characters. Some are good, some are bad, and a few are just evil. This is a book of fiction based on events that happen to inmates on a daily basis. It is a fictional account of what happens to an “Everyman” that gets caught up in a system deliberately designed to treat all felons the same.
Readers who wish to experience this potent work can purchase “Inside Out” at bookstores everywhere, or online at the Apple iTunes store, Amazon, Google Play or Barnes and Noble.