The award recognizes Uponor's commitment to quality as a supplier. 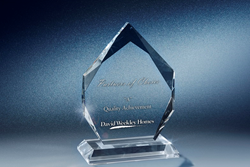 This is the second year in a row Uponor has won the David Weekley Homes Partners of Choice Award. In 2014, Uponor received an “A,A” ranking for world-class excellence in quality and service.

Uponor, who received an A ranking in quality, is one of only 12 companies out of 200 David Weekley Homes’ U.S. suppliers to receive the award in both 2014 and 2015.

Uponor North America (Uponor) was recently honored for the second year in a row with the prestigious Partners of Choice Award from Houston-based David Weekley Homes, the nation’s largest privately held home builder and the first builder in the United States to be awarded the Triple Crown of American Home Building.

Uponor, who received an A ranking in quality, is one of only 12 companies out of 200 David Weekley Homes’ U.S. suppliers to receive the award in both 2014 and 2015.

The award is based on the home builder’s supplier evaluation platform, which includes its comprehensive National Trading Partner Survey. The survey is administered to approximately 800 David Weekley Homes team members to evaluate trading partners on the basis of quality and service. Those companies that rank in the top 20 percent each quarter receive the award recognition.

Bill Justus, vice president of Supply Chain Services at David Weekley Homes, created the supplier-assessment platform in 2004 to improve the relationship and interaction between the builder and its suppliers. More than a decade later, the company’s National Trading Partner Survey has become a way of life for the builder and its suppliers to ensure both sides are working together toward a common goal of excellence.

“This year marks our twelfth year managing our evaluation platform and our eleventh year with the award program,” says Justus. “Over the past 11 years, only 31 companies have ever won the award two years in a row, so Uponor is part of a very select group of world-class suppliers.”

In 2014, Uponor received an “A,A” ranking for excellence in both quality and service.

“It is quite humbling to be part of a group of companies to receive the David Weekley Homes Partners of Choice Award two years in a row," says Carl Hines, national builder sales manager at Uponor. “Being chosen not just once, but twice, by the team members of David Weekley Homes as a top supplier is a tremendous honor, and we intend to continue our first-class quality and service to all the partners in our value chain.”

About Uponor
Uponor, Inc. is an award-winning provider of plumbing, fire safety, radiant heating/cooling, hydronic piping and pre-insulated piping systems for residential and commercial applications. In 2014, the company received a Best in Class award for Minnesota manufacturing, a Community Impact Award for sustainability, and a Progress Minnesota Award for driving business growth and economic development. In 2015, the company received the Governor’s Safety Award, a Community Impact Award for workplace giving and was named a Top 150 Workplace by the Minneapolis Star Tribune. Uponor, Inc. employs around 500 people at its North American headquarters in Apple Valley, Minn. For more information about Uponor, visit http://uponor.oreilly-depalma.com/ or http://www.uponor-usa.com/mediaroom.

Hi-res versions of photographs to accompany this release are available for immediate download in .png format by using this link: http://uponor.media-resources-ordp.com/2015/uponor-wins-weekley-home-choice-award.shtml