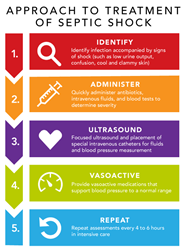 We’re at an interesting juncture where major policy changes are being implemented across the U.S. for patients with sepsis, but the ‘right’ approach still has many areas of uncertainty.

As hospitals nationwide brace for rigorous mandates for care of septic patients that will be adopted by the Centers for Medicare & Medicaid Services in October, a University of Pittsburgh School of Medicine review unveils research-based guidance to improve compliance when treating this common and deadly syndrome.

Sepsis is a life-threatening condition that arises when the body’s response to an infection injures its own tissues and organs. It occurs in more than 230,000 U.S. patients every year, with most initially receiving care in an emergency department. Despite best practice, more than 1 in 5 septic shock patients do not survive.

In this week’s issue of the Journal of the American Medical Association, Pitt researchers incorporate the results of several high-profile clinical trials into a concise clinical diagnosis and treatment algorithm to aid hospitals in the implementation of the National Quality Forum (NQF) Severe Sepsis and Septic Shock Management Bundle.

“The NQF sepsis bundle comes on the heels of several high-profile sepsis deaths that highlighted the need for better recognition, prompt treatment and frequent re-assessment of patients with septic shock,” said lead author Christopher W. Seymour, M.D., M.Sc., assistant professor in Pitt’s departments of Critical Care Medicine and Emergency Medicine. “The sepsis problem is clear, but the solution for patients remains elusive. This new algorithm provides doctors and hospitals with a best-practice approach to assessing and treating septic shock patients as supported by the most recent evidence.”

Dr. Seymour and co-author Matthew R. Rosengart, M.D., M.P.H., associate professor in Pitt’s Department of Surgery, use their review to stress what is known about good sepsis care – that prompt clinical diagnosis is crucial, and the first step in treatment is promptly addressing the infection. Their review also points out what is less certain, such as various diagnostic and monitoring tools that can be useful in certain subgroups of patients. They highlight new evidence that suggests rigorous, one-size-fits-all septic shock protocols are not superior to good clinical assessments among patients who already received timely treatment. A variety of medications and fluid therapies also can be used to support the patient’s circulatory system, but one is not always better than another.

“We’re at an interesting juncture where major policy changes are being implemented across the U.S. for patients with sepsis, but the ‘right’ approach still has many areas of uncertainty,” said Dr. Seymour. “As a start, we know that doctors must be able to quickly diagnose sepsis and begin treatment without delay. And they must be well-versed in the different treatments available and which ones are likely to work best in different septic shock situations.”

This work was supported in part by National Institutes of Health grant K23GM104022, and more information can be found at https://www.ccm.pitt.edu/CRISMA.