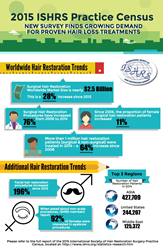 Since 2006, the worldwide number of hair restoration patients - both surgical and non-surgical patients - increased 64 percent

"The reason hair restoration surgery has surged in popularity over the years is simple -- it's a proven therapy to correct hair loss that has been continually refined with enhanced techniques and instrumentation that can create virtually undetectable results," said Sharon Keene, MD, president of the ISHRS. "With any type of cosmetic surgery, a doctor's training and experience matter. Patients often wish to restore the appearance of hair they once had. Hair restoration surgery is limited by the amount of available donor hair, but remarkable cosmetic restoration can be achieved. Sometimes this is accomplished by replenishing hair to a receding hairline or filling in a bald spot in men and adding fullness to a widening part in women. Often it involves creating the illusion of density with far fewer hairs than what nature once provided -- but results can be life changing for many.”

Despite a less-than-robust worldwide economy and nearly flat growth in real wages last year, the estimated worldwide market for surgical hair restoration in 2014 was nearly $2.5 billion USD. This is a 28 percent increase in market size since 2012 (see the full report for details). Overall, 1,055,480 hair restoration patients sought treatment for hair loss in 2014, representing a 9 percent increase since 2012.

Other notable trends and facts from the ISHRS Practice Census survey include:

Click HERE for an infographic summarizing the ISHRS 2015 Practice Census.

About the ISHRS
The International Society of Hair Restoration Surgery (ISHRS) is a global non-profit medical association and the leading authority on hair loss treatment and restoration with more than 1,200 members throughout 70 countries worldwide. Above all, the ISHRS is dedicated to achieving excellence in patient outcomes by promoting the highest standards of medical practice, medical ethics, and research in the medical hair restoration industry. The ISHRS also provides continuing medical education to physicians specializing in hair transplant surgery and is committed to delivering the latest information on medical and surgical treatments to consumers suffering from hair loss, and most commonly from androgenetic alopecia –male pattern baldness and female pattern hair loss. It was founded in 1993 as the first international society to promote continuing quality improvement and education for professionals in the field of hair restoration surgery. For more information and to locate a physician, visit http://www.ishrs.org.

About the Survey
Conducted by Relevant Research, Inc., of Chicago, IL, USA, the ISHRS 2015 Practice Census is a compilation of information provided solely by participating physicians. The information published in this survey was developed from actual historical information and does not include any projected information. The margin of error for the sample is within plus or minus 4.9 percent at the 95 percent confidence level. For a full reprint of the ISHRS 2015 Practice Census Report, visit Hair Restoration Statistics.