Clickstop Recognized as One of the Fastest Growing Companies in America

The company made the Inc. 5000 List of fastest-growing private companies for the sixth year in a row. 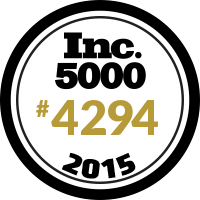 “Only a tiny fraction of the nation’s companies have demonstrated such remarkably consistent high growth, particularly in the difficult economic environment over the past few years."

Clickstop made its sixth consecutive appearance on the Inc.5000 list of fastest-growing private companies in America. Each year, the magazine ranks the top 5000 companies experiencing rapid growth. Clickstop ranked #4294 on the 2015 list.

“Only a tiny fraction of the nation’s companies have demonstrated such remarkably consistent high growth, particularly in the difficult economic environment over the past few years,” Eric Schurenberg, President and Editor of Inc. Magazine said. “This achievement truly puts Clickstop in rarefied company.”

Clickstop experienced a 63 percent growth rate over the last three years and revenue of $21.1 million. The company also ranked #19 on the magazine’s list of fastest-growing companies in the state of Iowa, adding more than 40 jobs in 2014.

Clickstop is the parent company of several brands in niche industries ranging from cargo control equipment to fasteners and reflective insulation. Clickstop CEO Tim Guenther founded the company’s flagship brand US Cargo Control in 2005. Over the last decade the brand has boomed.

The US Cargo Control division of Clickstop is growing so quickly the company will undergo a $6 million dollar building expansion that will bring an estimated 100 new jobs to the eastern Iowa area by the end of 2018. Much of the expansion will focus on adding space to the company’s manufacturing area where employees assemble cargo control equipment like ratchet straps and cargo nets. The project is set to break ground next month.

“Exciting things are happening at Clickstop as we continue to grow and expand,” Guenther said. “We have the right people and the right mindset to make big things happen.”

Clickstop first made the Inc. 5000 list of fastest-growing companies in 2010 with a ranking of #1122. The company has consistently made the list every year since. To see previous rankings and more information, visit Inc. 5000/Clickstop.

###
About Clickstop, Inc.
Clickstop is the parent company of a suite of brands based in Urbana, Iowa. Its focus on great workplace culture has landed the company multiple work environment-focused awards including two first place achievements as the Coolest Place to Work. Clickstop serves diverse markets that include the cargo control industry, energy efficient insulation products, and home organizing solutions. For more information visit Clickstop.com.