Ziegler, a specialty investment bank, is pleased to announce the successful closing of the $109,380,000 tax-exempt, fixed-rate Series 2015 Bonds for The Buckingham. 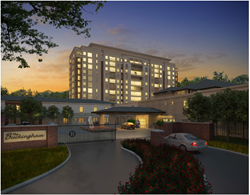 SQLC has developed a reputation for the operation of high quality senior living communities and has been one of the more active senior living capital markets participants in the past 15 years with over $1.0 billion in par amount of bonds issued...

Ziegler, a specialty investment bank, is pleased to announce the successful closing of the $109,380,000 tax-exempt, fixed-rate Series 2015 Bonds for The Buckingham.

Senior Quality Lifestyles Corporation (SQLC), a Texas not-for-profit organization, was formed in July 2002 and serves as the sole corporate member of Buckingham Senior Living Community, Inc. (the Obligor). SQLC is the nation’s 30th largest not-for-profit provider of senior living services based upon the 2014 LeadingAge Ziegler 150 (LZ 150) ranking and the largest in Texas. SQLC operates five communities in Texas with a total of 1,586 total units and The Barrington of Carmel in Carmel, Indiana, which opened in 2013 for a total of 1,857 units. In addition to the Obligor, SQLC is the sole corporate member of the following organizations: Northwest Senior Housing Corporation, Barton Creek Senior Living Center, Inc., SQLC Senior Living Center at Corpus Christi, Inc., Tarrant County Senior Living Center, Inc., Mayflower Communities, Inc., and SQLC LSA, LLC.

The Obligor owns and operates a senior living community known as The Buckingham (the Community). The Community is located on an approximately 23-acre site in the Memorial/Tanglewood areas of Houston, an affluent area of the city just west of the Houston Galleria. The Buckingham currently consists of 204 residential independent living apartments, an assisted living center, including 43 assisted living units and 16 memory support assisted living suites, and a health center comprised of 60 nursing beds.

The expansion of the Community, to be financed with the issuance of the Series 2015 Bonds, is to consist of the following: 106 additional independent living units; 27 additional assisted living units; 18 additional memory support units; 32 additional skilled nursing beds; and an underground parking garage with 111 total spaces and an additional 292 surface level spaces.

The Series 2015 Bonds are being issued on a parity basis with the outstanding Series 2014 and Series 2007 Bonds. Fitch Ratings has assigned a rating of BB (stable) to the Series 2007, Series 2014 and Series 2015 Bonds. The 30-year bond issue achieved a yield to maturity of 5.23%. The final bond structure included a total of $58.5 million in temporary debt to be redeemed with the proceeds of initial entrance fees after establishing defined levels of working capital and operating reserves. The issuance of the Series 2015 Bonds represents the fourth time that Ziegler has served as the underwriter for a transaction for The Buckingham and the 12th time for a SQLC sponsored community.

Rich Scanlon, Managing Director in Ziegler’s senior living practice, commented, “SQLC has developed a reputation for the operation of high quality senior living communities and has been one of the more active senior living capital markets participants in the past 15 years with over $1.0 billion in par amount of bonds issued since 1999. The Series 2015 were purchased by a total of 23 institutional investors, of which 9 were “first time” SQLC project buyers. The Buckingham expansion changes the character of this community and will solidify their reputation as the senior living provider of choice in western Houston.”

About Ziegler:
The Ziegler Companies, Inc., together with its affiliates (Ziegler), is a privately held, specialty investment bank with unique expertise in complex credit structures and advisory services. Nationally, Ziegler is ranked as one of the leading investment banking firms in its specialty sectors of healthcare, senior living, religion, and education, as well as general municipal and structured finance. Headquartered in Chicago, IL with regional and branch offices throughout the U.S., Ziegler provides its clients with capital raising, corporate finance, FHA/HUD, strategic advisory services and research. Ziegler serves institutional and individual investors through its wealth management and capital markets distribution channels.