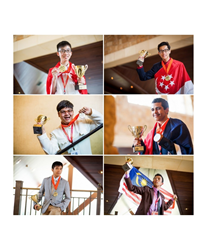 In its 14th year, the 2015 Microsoft Office Specialist World Championship (MOSWC) attracted 600,000 unique candidates from 47 countries who competed to demonstrate their mastery of Microsoft Office products. 145 student finalists participated in the final round of competition.

Certiport recognized the top six student competitors at the Microsoft Office Specialist World Championship Student Awards Ceremony at the Gaylord Texan Grapevine Resort in Dallas, Texas and presented each 2010 winner with a $5,000 scholarship and 2013 winner with a $7,500 scholarship.

"More than 1.2 billion people use Office worldwide, and these students have taken the time to set themselves apart as the best of the best,” said Alison Cunard, general manager of Learning Experiences at Microsoft. "Earning a Microsoft Office Specialist certification has already provided proof that they have the necessary skills to succeed in academics and the workforce. Winning the World Championship puts them in a class of their own, and we look forward to seeing how they put their Microsoft Office skills to use in the future"

In the concluding round, competitors participated in unique project-based tests to demonstrate their ability to create documents, spreadsheets and presentations for the information presented in Word, Excel and PowerPoint.

“The MOSWC showcases the power of technology in education and gives youth from around the world an experience that will benefit them for years to come,” said Tong Viet Trung, deputy director of Viettel Group, MOSWC premier sponsor. “We are impressed by the competitors and how well they have prepared for further study and jobs by gaining valuable Microsoft skills.”

Next year, Certiport will host the 2016 Microsoft Office Specialist World Championship in Orlando, Florida. Download high-resolution photos of the winners at https://www.flickr.com/photos/certiport/sets/72157657166045785. The event hashtag is #MOSWC.

"Every year this competition grows and it is amazing to see 600,000 youth earn Microsoft Office Specialist certification,” said Aaron Osmond, vice president of the global Certiport offering for Pearson VUE. “Next year will be no different and we are proud to support this competition as a vehicle to promote what the world needs most – young people who possess in-demand workforce skills.”