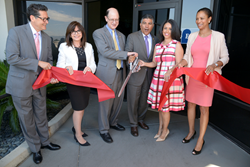 This new asset at Van Nuys Airport will allow the airport to provide more efficient aircraft operations benefiting business, the environment and the public alike

Van Nuys Airport (VNY) and Signature Flight Support hosted an open house to celebrate the grand opening of the new 1,528-square-foot U.S. Customs and Border Protection (CBP) facility. Since its opening on May 21, 2015, more than 75 international flights have been successfully cleared, providing direct benefits for business travelers, the local economy, and reducing airspace congestion in Southern California.

As one of the world’s busiest general aviation airports, VNY had been without CBP officers since 2006 when on-call customs clearance services were suspended at all airports within the Los Angeles basin except at Los Angeles International Airport. Over the past six years, VNY management has worked in close collaboration with airport tenants and key stakeholder groups to reestablish CBP services at the general aviation airfield.

The return of clearance services for arriving international flights comes at no cost to the federal government thanks to collaboration among aircraft operators, airport management and government officials.

“Van Nuys Airport is one of the most important civil aviation hubs in the country,” said U.S. Congressman Tony Cárdenas. “After years of advocating the return of Customs services, I am proud to say that it is now the only general aviation airport in Los Angeles with an on-site Customs and Border Protection facility. I am very pleased about the jobs that the new Customs station will create, both at Van Nuys Airport and for airport customers throughout the San Fernando Valley.”

The new CBP facility adds significant convenience for arriving international travelers, who can fly directly to VNY without first stopping at another airport to clear Customs. Besides saving private jet travelers time and money, the service benefits the environment by reducing emissions from repositioning flights and decreasing overall aircraft operations within Southern California’s congested airspace.

U.S. Congressman Brad Sherman said, “This significant regional enhancement represents a high level of collaboration and effort by numerous partners of CBP, including aircraft operators, airport management, and community leaders. Having worked to persuade CBP to return Customs services to Van Nuys Airport for several years, I am grateful to see this public-private partnership bringing valuable service, and environmental and economic benefits to the San Fernando Valley.”

The dedicated CBP facility features an interview room, inspection room, office space and a high level of security, similar to that found at our nation’s large commercial airports. Facility user fees charged to arriving aircraft have been modeled to fully offset facility improvement and operating costs. Hours of operation are Thursday through Monday, 12 p.m. to 8 p.m. Requests for services outside these normal operating hours are available but must be arranged with CBP.

As a designated User Fee Clearance facility, VNY is assigned a full-time Customs agent to process arriving international aircraft, passengers and cargo. Signature Flight Support, which advanced approximately $248,000 to construct a dedicated clearance facility, is responsible for collecting user fees and making payments to LAWA that are then submitted to CBP for staffing and operational costs.

“Signature is proud to host the new U.S. CBP office in Van Nuys Airport on our leasehold,” said Maria Sastre, President and Chief Operating officer for Signature Flight Support. “We have experienced more demand than we expected for this convenient and efficient program which provides international arrivals a clearance process that clearly benefits the users of business aviation here at Van Nuys Airport.”

VNY’s proximity to downtown Los Angeles, Hollywood and LAX, combined with the addition of CBP services, makes it the ideal destination for business travelers. The airport’s three Fixed Based Operators offer a full range of services and amenities including modern passenger lounges, fueling services, maintenance support, and aircraft hangar and tie-down areas.

Landing rights at VNY are available with advance reservation by emailing the CBP at landingrights-lax(at)dhs(dot)gov. Flights desiring to arrive outside of these hours must make arrangements with CBP in advance. For requirements and more information, visit cbp.gov/travel/pleasure-boats-private-flyers.

U.S. Customs and Border Protection:
CBP is committed to improving the traveler experience upon arrival into the United States – increasing tourism and fostering economic growth while ensuring the highest level of security.

About Van Nuys Airport:
VNY is one of three airports owned and operated by Los Angeles World Airports (LAWA), a self-supporting branch of the City of Los Angeles, governed by a seven-member Board of Airport Commissioners who are appointed by the Mayor and approved by the Los Angeles City Council.

One of the world's busiest general aviation airports, VNY serves as a valued San Fernando Valley resource, providing ongoing leadership in general aviation, business and community service. Dedicated to noncommercial air travel, VNY had over 238,000 operations in 2014. More than 100 businesses are located on the 730-acre airport, including three major Fixed Base Operators and numerous aviation service companies.

Annually, the airport contributes approximately $1.3 billion to the Southern California economy and supports over 12,000 jobs. In addition, VNY provides programs to benefit local residents, along with educational initiatives and aviation-related career and training opportunities. For more information, visit lawa.org/vny, like us on Facebook at Facebook.com/VNYOfficial, follow us on Twitter at twitter.com/VanNuysAirport and Instagram at instagram.com/vannuysairport.

As a covered entity under Title II of the Americans with Disabilities Act, the City of Los Angeles does not discriminate on the basis of disability and, upon request, will provide reasonable accommodation to ensure equal access to its programs, services, and activities. Alternative formats in large print, Braille, audio, and other forms (if possible) will be provided upon request.