The Big Reveal: IDSA Marks 50 Years by Unveiling the Winners of IDEA 2015

The Best in Global Design is Honored @IDSA #IDSAIDEA #IDSASeattle15 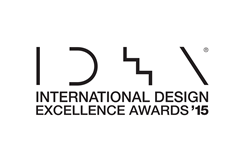 “Tonight, we inspire you to reach for the Gold."

In a red carpet ceremony at stunning Benaroya Hall in Seattle on August 22, 2015, the Industrial Designers Society of America (IDSA) unveiled the Gold, Silver and Bronze winners of the 2015 International Design Excellence Awards (IDEA).

“Tonight, we inspire you to reach for the Gold,” said John Barratt, the new chair of IDSA’s Board of Directors and president and CEO of TEAGUE, as he launched the 35th annual IDEA ceremony which was held during the 50th anniversary of IDSA.

“I hope you are excited as I am by the future of design excellence,” added Matthew Marzynski, chair of the IDEA 2015 jury.

He was joined by three other IDEA presenters—who also served on the 24-member jury: Marc Greuther, chief curator at The Henry Ford; Owen Foster, IDSA’s 2015 Educator of the Year; and Cameron Campbell of Methodoligie, who will be the IDEA 2016 jury chair.

The IDEA 2015 Chair Award was given to Blackmagic Cintel Film Sensor, for continuing to build a young legacy of industrial design. “For the past several years, Blackmagic has entered a remarkable collection of products into IDEA,” explained Marzynski. “I have watched jurors coveting the designs which have that pure, lizard brain, tech lust, high quality form and finish we love to see.”

A complete list of IDEA 2015 winners can be found on http://www.idsa.org. Congratulate the winners on Twitter @IDSA #IDSAIDEA #IDSASeattle15

IDEA 2016 will be held during next year’s IDSA International Conference, set for August 17-20 in Detroit. The competition will begin accepting entries in January 2016.