August 19th is a day set aside to honor the crucial contributions humanitarian workers make in dangerous conditions around the world. Unbound’s Director of International Programs calls for 24 hours of gratitude for the women and men who courageously put their lives at risk to make sure aid reaches the people who need it. 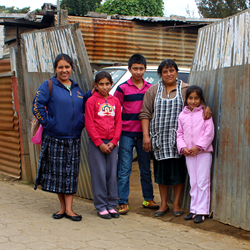 An Unbound social worker with a family in the Unbound sponsorship program in Guatemala.

Our field staff is going to the places most people are running away from. They put themselves at risk to realize the good intentions of the donor.

Unbound, a humanitarian organization working in 20 countries around the world calls for 24 hours of gratitude to honor all those who put their lives on the line in the service of others.

“It’s risky,” said Dan Pearson, director of international programs. “Our field staff is going to the places most people are running away from. They put themselves at risk to realize the good intentions of the donor.”

Pearson is talking about Unbound social workers such as Carmen (not her real name), from El Salvador. She carefully considers her risks every time she visits families who live in the most vulnerable communities in the country.

She has been subjected to intimidation, extortion and death threats. “I was afraid that they would attempt to take my life,” she explained.

For Unbound staff, and humanitarian workers all over the world, danger is part of the job description.

This year World Humanitarian Day will remember and honor aid workers who have put themselves at risk or died in order to save others from Ebola, civil war, ISIS, and the aftermath of a devastating earthquake in Nepal last April.

Unbound field staff have been shot, threatened and robbed in many parts of the world. Others have been killed in car crashes often resulting from hazardous road conditions, or died from infections they developed working in contaminated flood waters.

Yet humanitarian aid workers continue to show up for work.

“I will not stop going because I’m afraid,” said Carmen. “Some asked me why I don’t change my job. The reason why I continue here is the families. All that we share with them fills me up; and that is like a motor for us, the children and the families.”

Unbound asks you to offer a message of thanks and encouragement to the brave humanitarians who carry a heavy load in the field. Share the story of Unbound with family and friends on Facebook, Twitter or Tumblr, or sponsor a child in honor of the day.

Without those willing to put themselves in danger, the aid donors contribute often wouldn’t make it where it’s needed most.

“Think of the money moving across the globe,” Pearson said. “It’s the last mile or two that is the riskiest. It’s the people who are carrying it that are not often talked about.”

About Unbound
Unbound is the largest nonprofit organization in Kansas with more than $120 million in annual revenue. Unbound works side by side with people of diverse faiths in 20 countries, bringing people together to challenge poverty in new and innovative ways.

Unbound distributes direct aid as quickly and efficiently as possible to people who need it. 92.5 percent of Unbound's expenses go toward program support.
###