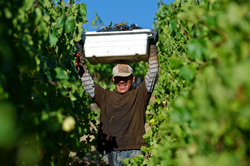 The crop looks beautiful with looser clusters than normal and small berries that should yield robust flavors. Winemakers should have the weather patterns to produce stylistic wines.

Winegrowers of Dry Creek Valley (WDCV) expect the 2015 winegrape harvest to yield exceptional quality fruit in smaller quantities than the last three vintages, which were larger than normal throughout most of the state of California. Picking began earlier than usual this year, with David Coffaro Estate and Amista Vineyards harvesting grapes for their sparkling wines on July 29 and August 3, respectively. In 2014, Amista Vineyards harvested for their blanc de blanc two days later on August 5.

Cameron Mauritson, Manager of Mauritson Farms and President of the Winegrowers of Dry Creek Valley, anticipates starting to harvest in the middle of August, about 10-14 days ahead of last year. “We have been blessed with wonderful California weather that has sped things up. The crop looks beautiful with looser clusters than normal and small berries that should yield robust flavors. Winemakers should have the weather patterns to produce stylistic wines,” he says.

Ridge Vineyards reported their earliest zinfandel harvest on record in their East Bench Vineyard. “The dry, warm weather we had from February through April led to a very early bloom and thus the record start to the harvest,” says Will Thomas, Ridge Vineyards’ Sonoma County Viticulturist.

The harvest season will continue for the next two months, with the harvest of Bordeaux varieties including merlot and cabernet sauvignon in September and late-ripening grapes like mourvedre grapes and late-harvest zinfandel in October.

Several years of drought in California affected farmers all over the state, but Dry Creek Valley winegrowers seize the opportunity to learn from the challenges they face. Mauritson explains, “The drought has been an opportunity for many growers to look closely at their soil health and make sure they are maximizing the available water holding capacity of the vineyard site so vines can survive as long as possible by natural rainfall.”

Tim Bell, winemaker at Dry Creek Vineyard says that last year at the winery’s Endeavour Vineyard, they cut back on the number of vine shoots and grape clusters to reduce water demand, but were pleased to find out that they could get by with even less water than they planned for.

Despite the resilience of the grapes and their growers, many expressed hope for some relief from the drought. “We’re praying that the El Niño predictions for a wet winter play out in the right way: plenty of rain spread out over time and cold enough storms to pack the Sierras with snow,” says Bell.