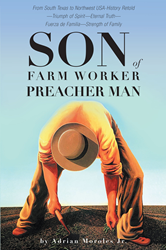 Published by New York City-based Page Publishing, Adrian Moroles Jr.’s poignant tale tells a historic and memorable story about the past and the success of a migrant worker.

He was from a 2nd generation U.S. immigrant farmworker family. He was a battalion champion boxer in the U.S. Army. He became a legendary Spanish speaking evangelist preacher in South Texas. This is the story of Adrian Moroles as told by his son Adrian Jr. It is also the story of growing up of Mexican descent in South Texas during 50’s, 60’s, and moving to Northwest U.S.A. As told by his son, his death became legendary but that, like a world championship, was his greatest victory. As he retells history Adrian’s story will make readers laugh, cry and reconsider Columbus Day in favor of Indigenous People’s Day.

Readers who wish to experience this inspiring work can purchase “Son of Farm Worker Preacher Man” at bookstores everywhere, or online at the Apple iTunes store, Amazon, Google Play or Barnes and Noble.