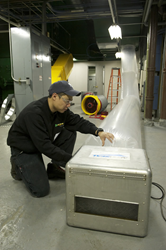 Duct Sealing from the inside: an innovation in duct sealing technology

A recent outbreak of Legionnaires disease in New York City has contributed to an increased interest among property owners and facility managers in the role that duct leakage plays in the spread of the disease. According to Neal Walsh, senior vice president of Aeroseal LLC, a duct sealing technology company, HVAC businesses throughout the East Coast and elsewhere have experienced a notable increase in customer inquires related to the Legionnaires outbreak and indoor air quality in general.

“We have heard from a number of our East Coast dealers that are responding to an uptick in calls from commercial clients that are concerned about the recent epidemic,” said Walsh. “They are learning that the microbes responsible for Legionnaires disease are typically spread through a contaminated indoor air environment, and that has led them directly to concerns about duct leakage.”

According to the Center for Disease Control (CDC), the EPA and others, duct leakage can be a major contributor to health risks associated with poor indoor air quality. Leaks in the ductwork allow contaminants to enter the duct system at one location within a structure and then spread throughout the rest of the building.

Experts believe that Legionella Pneumophila, the bacteria that causes Legionnaires disease, is typically spread through a building’s ventilation system. In the recent New York City epidemic, the outbreak has been traced to contaminated cooling towers*, which release water mist. It is likely that the contaminated water mist spread throughout the atmosphere with the assistance of leaky ventilation systems, and then was inhaled by occupants.

“It’s estimated that poor indoor air quality costs businesses as much as $100 billion a year in lost productivity, health costs and other related problems,” said Walsh. “Poor indoor air quality can cause everything from headaches, coughing and skin irritation to more serious health concerns such as what we’re seeing in New York.”

Since it first appeared in late July, more than 100 people have been diagnosed with Legionnaires Disease. While this disorder is easily diagnosed and can be treated with antibiotics, 10 people have died due to this latest outbreak.

To help minimize health risks associated with poor indoor air quality, many health organizations including the CDC, the EPA and the American Lung Association, recommend sealing ductwork. While some leaks can be addressed using traditional duct sealing methods, studies show that the most efficient and cost-effective means of sealing ductwork is with the use of aerosol-based duct sealing technology.

“We are working hard to educate the public about the problems associated with poor indoor air quality and the role that duct leaks play in exacerbating the problem,” said Walsh. “The recent Legionnaires outbreak is a reminder of how easily airborne diseases can spread and put us all at risk.”

For more information about improving indoor air quality, the role that duct leaks play in contributing to poor IAQ or to learn about innovations in duct sealing technology, visit http://www.aeroseal.com or call 937-428-9300.