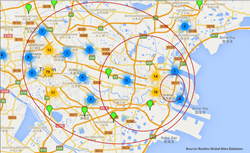 This event’s economic relevance and its repercussions on the global supply chain will be felt over the next few months and perhaps years to come.

One of the world’s foremost authorities on supply chain risk management and CEO of Silicon Valley -based Resilinc Corp., Bindiya Vakil, has been on a mission for the past two weeks. She’s been scrambling to warn the global business community that the impact on global supply chain operations − from the two massive explosions that occurred on August 12 at the Ruihai International Logistics warehouse in Tianjin, China − will be far worse than suggested by news analysts and Chinese officials.

“Be skeptical of media reports indicating that business and port operations will shortly return to normal,” she says. “This event’s economic relevance and its repercussions on the global supply chain will be felt over the next few months and perhaps years to come.”

Some of Vakil’s early predictions of ripple effects on regional and international manufacturing and logistics are already beginning to play out. This includes an accelerating number of impacted suppliers from the 176 number noted by the Tianjin Mayor in his first media appearance, and under-reporting on the true environmental effects on residents, workers, and local business.

The explosions, tied to the storage of hazardous chemicals without proper permissions and compliance to safety regulations, registered as the equivalent of 2.3 and 2.9 magnitude earthquakes (that latter the equivalent of 21 tons on TNT), according to the China Earthquake Administration. The explosions devastated an area of about two square miles and were felt as far as ten miles away. The impact of the blasts was detected by a USGS monitoring unit in Beijing 100 miles away. Initially 114 people were reported dead, 700 others injured, and more than 50 missing. The blasts damaged 17,000 homes affecting 30,000 people. In a two-mile radius from ground zero, warehouses, port buildings, transportation infrastructure, and processing facilities were extensively damaged.

Vakil cites four primary reasons why she believes the effects are being underestimated and will ripple well beyond the immediate regional economic zone and have global implications. First, she points out that news media and company stakeholders may not understand fully the economic importance of the Tianjin commercial zone which she describes as enormous.

Close to 12 million people call Tianjin home. The coastal city, located 30 minutes by train from Beijing, is a vital logistics and manufacturing hub for northeastern China. Key global industries depend on the Tianjin commercial area, such as electronics, aviation & aerospace, automotive, petrochemicals, equipment manufacturing, and biotech. The Port of Tianjin is the third largest in the world by cargo volume, and the 10th largest in the world by container traffic, with half of its U.S.-bound cargo sent to either Los Angeles or Long Beach, California. Moreover, Resilinc has mapped over 200 electronics, life sciences, and automotive manufacturing sites in the broader Tianjin region and about 30 sites in the 10-15 mile area of the explosion zone.

Second, Vakil points out that China carefully controls and filters news and that the severity of a given disruption event is frequently downplayed in China, especially when it comes to disasters that have environmental and human health consequences. What we do know she says is that environmental officials have expressed ‘concern’ that recorded levels of Sodium Cyanide in the explosion zone were as much as 350 times higher than the safety level and that Cyanide levels in the waters around Tianjin port had risen to 277 times the acceptable level.

This has direct implications for suppliers whose workforce will be unable to return until concerns about hazardous working conditions have been addressed or must stay home to care for children as result of school closures in the evacuation zone or disruptions to the transportation infrastructure.

“Some of these suppliers that go lines down represent sole sources of parts required by large global electronics and machinery OEMs to ship their product,” says Vakil. “And, because these suppliers may be many levels deep in their supply chain, the impact to future shipments and revenue is unknown to them because of a lack of sub-tier supplier visibility.”

Third, Vakil forewarns of the potential for long-term environmental and public health impacts that may begin to manifest as a result of several tons of dangerous chemicals polluting the air supply and water table in the region. Chinese and trading partner government reactions could forever change the regulatory landscape for companies operating and utilizing these chemicals worldwide. Vakil recommends that companies expect and prepare to be affected by new regulations, audit requirements, and heavier fines for their supplier’s non-compliance.

“I have seen this headline before,” says Vakil. Read all about it. Public outcry and media criticism about irregularities in compliance and safety standards leads to a government crackdown and shutdown of hundreds of suppliers overnight – is your critical supplier one of them?”

The last reason Vakil offers to support her prediction of more dire supply chain operational consequences is that companies have been slow to adequately invest in resiliency strategies, processes and tools, such as 24x7 global event monitoring, supply chain visibility/mapping, proactive risk mitigation, and crisis response planning. The supply chain risk management leaders look at situations like Tianjin not as a threat, but an opportunity to exercise their competitive advantage by being faster to recover and meet customer demand.

A comprehensive complimentary report is available for immediate download from the Resilinc web site entitled: “The Aftermath of the Tianjin Explosions: A Global Supply Chain Impact Analysis—It’s Far Worse than You Think”

About Resilinc
Resilinc is the leading cloud provider of supply chain resilience and risk management intelligence and analytics. Industry leaders like Amgen, GM and EMC rely on Resilinc to mitigate risks end-to-end, while achieving long-term competitive advantage, and building brand and shareholder value. The Resilinc solution delivers the fastest time-to-value and the lowest resource Impact. It accomplishes this by providing the world’s largest repository of supplier and part intelligence leveraging the power of our “LinkedIn” supplier community; the most robust set of dashboard visualization and patent-pending analytic functionality for pro-active planning and risk quantification; and the only solution that personalizes your impact analysis by automatically connecting incidents with your supply chain map so you don’t have to.