At their annual conference this past July in New York City, the New York State Athletic Trainers’ Association (NYSATA) announced Dr. Merritt F. Spear as the recipient of their 2015 Kent Scriber Recognition Award. Jarett Rhoads, MSEd., ATC, CSCS was also recognized for his many years of service to the NYSATA Executive Board. 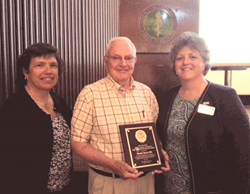 Dr. Spear deserves to be recognized for his contributions to the athletic training profession and his encouragement and care of so many.

On Saturday, July 11, 2015, during the annual New York State Athletic Trainers’ Association (NYSATA) conference at Langone Medical Center in New York City, NYSATA was proud to recognize Dr. Merritt F. Spear as the 2015 recipient of the Kent Scriber Recognition Award. NYSATA’s Kent Scriber Recognition Award, named after long-time NYSATA member and Ithaca College athletic trainer and educator, is considered for individuals or groups who are deserving of recognition for acts, promotion, support and/or service which positively reflect the goals and mission of NYSATA and the profession of athletic training within New York State.

For over thirty-five years, Dr. Spear has supported and mentored many certified athletic trainers (ATs) and athletic training students, while making a difference in the lives and careers of thousands of student-athletes. Dr. Spear was ahead of his time in understanding the role and value of the athletic trainer long before most other medical professionals and administrators in NYS and he has been an advocate for ATs since the 1970s. During his career, Dr. Spear volunteered at the Empire State Games (ESG) year after year, working alongside many athletic trainers and athletic training students from all over the region, becoming a common fixture and gaining admiration by athletic trainers. Those who were fortunate enough to spend time at the Games with Dr. Spear experienced firsthand how he enthusiastically represented the mission of the NYSATA - to advance, encourage and improve the profession of athletic training (AT) by developing the common interests of its membership for the purpose of enhancing the quality of health care for the physically active in NYS. Dr. Spear epitomizes the very best of what any organization would want in a team physician - and he has served as an inspiration to those he has worked alongside.

Dr. Spear deserves to be recognized for his contributions to the athletic training profession and his encouragement and care of so many. His constant guidance, insight and benevolence have made a difference to the AT profession. The Empire State Games were an opportunity for him to educate the public as well as foster a relationship between physicians and residents from an assortment of specialties with athletic trainers. He firmly believed that for team physicians or sports medicine specialists to succeed in their practice, they needed to understand the key role the athletic trainer played on the health care team.

Dr. Spear is committed to the sports medicine community as a whole. In addition to his long tenure with the Empire State Games, he has been involved at SUNY Plattsburgh as Director of Sports Medicine, and has lectured on sports injury to various organizations in the North Country of NYS. He has also held several positions with the medical section of the United States Olympic Committee (USOC), primarily in the Lake Placid area, and with the NYS College Health Association.

In addition to honoring Dr. Spear in front of the nearly two-hundred conference attendees, NYSATA also recognized Jarett Rhoads, MSEd., ATC, CSCS for his tenure of service to the NYSATA Executive Board, specifically for his role as NYSATA Secretary that spanned nearly a decade. Rhoads has also held committee positions with Public Relations and Governmental Affairs, and currently serves as the Chair of the Secondary School Committee.

NYSATA, founded in 1976 and incorporated in 1989, stands to advance, encourage and improve the profession of athletic training (AT) by developing the common interests of its membership for the purpose of enhancing the quality of healthcare for the physically active in NYS. Athletic training is practiced by certified athletic trainers (ATs), who have expertise in the assessment, emergency management, rehabilitation and prevention of acute and chronic sport-related injuries, illnesses and conditions, including concussions. Comprised of over 1,200 certified and practicing athletic trainers, NYSATA is the state-wide affiliate of the regional EATA and District Two of the NATA.