The impact of a Fed rate increase could stop the current economic recovery in its tracks, much like it did in 1937, according to Jim Nutter, Jr., CEO of James B. Nutter & Company (jbnutter.com). The US housing market has been leading the US economy but a rate hike could hurt new mortgages. 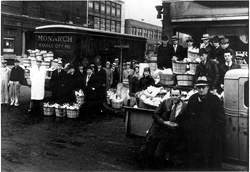 Depression relief during the Great Depression

“The impact of a Fed rate increase could stop the current economic recovery in its tracks, much like it did in 1937.”

Hall of Fame catcher Yogi Berra once remarked after watching Mickey Mantle and Roger Maris belt consecutive home runs, “It’s like déjà vu all over again!” Here in 2015, there is growing concern that we’re experiencing a form of economic déjà vu with respect to the Federal Reserve’s plans to raise interest rates at their September meeting. “Only this time,” according to Jim Nutter, Jr., CEO of James B. Nutter & Company, “the impact of a Fed rate increase could stop the current economic recovery in its tracks, much like it did in 1937.”

Even though the US economy is strong, the rest of the world’s economies are not. Recently, when China unexpectedly devalued their currency to boost their sagging economy, it caused financial turmoil in stock markets here and abroad. “If the Fed decides to raise rates in September, it will cause the US dollar to rise so high it will be a job killer because the price of US exports will be uncompetitive,” Nutter warned. “Also, the price of oil will continue to fall. If that happens, you are looking at the ‘D’ word happening—deflation.” Nevertheless, Federal Reserve Chairman Janet Yellen has very carefully and very openly laid the groundwork for the Federal Reserve to raise interest rates later this year, and she practically telegraphed the Fed’s intent to do so when she testified before Congress in July.

But the best laid plans of the Fed could go awry. Recent economic developments in the US, Chinese and European economies have spurred calls for the Fed to reconsider its strategy, but it may be too late. Nutter has become concerned that Fed Chairman Yellen has backed herself into a corner with her July comments and that she may have no choice but to follow through with her commitment to raise interest rates this year. Such a rate increase would likely occur at the Fed’s next meeting on September 16th.

The potential impact of a premature rate hike by the Fed has Nutter calling for the Fed to consult their history books. Is this déjà vu all over again? “In 1937, the US economy was in the midst of a dramatic recovery from the Great Depression, having recorded its fourth consecutive year of double digit GDP growth and the unemployment rate, which had once stood as high as 25% had been nearly cut in half.” Nutter continued, “Yet the Federal Reserve, thinking that it was safe to increase interest rates, began executing an exit strategy and prematurely tightened its monetary policy. The results were disastrous for our country—the US economy tumbled back into recession and did not fully recover until after we entered World War II.”

Nutter believes the lessons of 1937 are quite compelling and can serve as a basis for comparison to Chairman Yellen’s current predicament. “There is virtually no inflationary activity in the US economy right now, so the Federal Reserve has the luxury of waiting,” Nutter said, “We should not repeat the mistakes of 1937 and risk hurting the US housing market, which is the best sector in our economy right now.” Perhaps even more importantly, raising interest rates will impact foreign economies, at a time when many countries such as China and Greece are experiencing severe economic instability. “I’m concerned that the US dollar will strengthen even more which could increase the price of US export goods to unacceptable levels. The price of key US commodities such as oil could also be adversely affected,” Nutter warned. “The resulting decline in US competitiveness could trigger a deflationary cycle that could slam the brakes on the US economic recovery.”

And what about the US housing market—an area of strength that has been leading the US economy? If the Fed increases interest rates prematurely and the US economy begins to lag, the real estate market could be dealt a savage one-two punch. Which strategy will the Federal Reserve choose? Stay tuned. As Yogi Berra once said, “It ain’t over ‘til it’s over.”

About James B. Nutter and Company
James B. Nutter & Company (jbnutter.com). founded in 1951, is one of America’s oldest and largest privately owned mortgage lending firms. The company is based in Kansas City, MO., and provides home lending services in all 50 states and the District of Columbia. Through the years, "personal touch" customer service and consumer advocacy has remained hallmarks of the firm's way of doing business. James B. Nutter, Jr. is President and Chief Executive Officer.