Liberty University held a groundbreaking on Monday, Aug. 31, in celebration of its 275-foot-tall Freedom Tower, set to open Spring 2017. 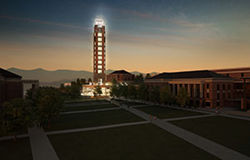 Liberty University held a groundbreaking on Monday, Aug. 31, in celebration of its 275-foot-tall Freedom Tower, set to open Spring 2017.

Liberty University held a groundbreaking on Monday, Aug. 31, in celebration of its 275-foot-tall Freedom Tower, set to open Spring 2017. When complete, the tower will be the tallest building in Lynchburg.

The tower will be built on the north end of campus, near Reber-Thomas Dining Hall, and its extended base will become the new home of the School of Divinity. The tower will be a testament to Liberty’s commitment to prepare students both academically and spiritually.

President Jerry Falwell called the ceremony the school’s first “ground blasting,” as an oversized model of a detonator on the stage was used to set off a small dynamite blast several yards away in the background.

Falwell said the new tower will be a symbol of God’s blessing on Liberty University.

“After 40 years of surviving in temporary buildings, it is so nice to see this campus start to take shape and develop architectural character,” he said.

Falwell said that the Freedom Tower will be a “focal point” of Liberty.

“In the future, when you think about Liberty’s campus, this tower will be what everybody will think about,” he said, noting that it will be a landmark just as the Rotunda is at the University of Virginia or the Duke Chapel at Duke University.

Falwell announced that Liberty’s replica of the Liberty Bell — unveiled in 1976 in recognition of America’s bicentennial and the renaming of Lynchburg Baptist College to Liberty Baptist College — will be placed among a 25-bell assembly at the top of the tower. Donors will have a chance to have their names engraved on these bells. The Liberty Bell is currently located across from DeMoss Hall.

Dr. Ed Hindson, dean of the School of Divinity, said that the name Freedom Tower is appropriate because of what Liberty represents.

“We stand for the freedom of the power of the Gospel. The power that will set you free from bondage to sin, to indifference, to an attitude of disappointment in life, frustration, and all of the problems that human beings face in life. These problems are set free by the power of salvation through the person of Jesus Christ,” he said. “Freedom is a message of truth that transforms an individual that not only forgives our sin, but changes us from within and makes us new creations.”

Hindson said that for Liberty, the Freedom Tower will point “Heavenward.”

“It will remind us that God is the center of this campus and that He is the reason why we do everything,” he said.

Liberty University, founded in 1971, is the largest private, nonprofit university in the nation, the largest university in Virginia, and the largest Christian university in the world. Located near the Blue Ridge Mountains on more than 7,000 acres in Lynchburg, Va., Liberty offers more than 450 unique programs of study from the associate to the doctoral level. More than 200 programs are offered online. Liberty’s mission is to train Champions for Christ with the values, knowledge, and skills essential for impacting tomorrow’s world.