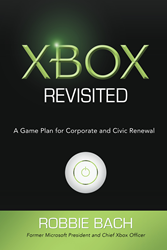 You have to build the foundation before you put up the house. True in business, true in civics, true in life

Robbie Bach helped guide the evolution of gaming for more than a decade as Microsoft’s former Chief Xbox Officer and President of Entertainment and Devices. Now, he’s turned his career inside out, translating business tenets into an actionable approach to complex civic issues.

In his new book Xbox Revisited: A Game Plan for Civic and Corporate Renewal (Brown Books Publishing Group), Bach has launched a powerful model for driving transformational change in business and civic institutions based on the 3P Framework of Purpose, Principles, and Priorities developed by the Xbox team during his time at Microsoft.

“Robbie presents a highly effective, common-sense strategy to address difficult business and community issues. And in the process, he challenges all of us to step up to the plate and participate in renewing our civic and political institutions,” notes Jeff Raikes, co-founder of the Raikes Foundation and former CEO of the Bill & Melinda Gates Foundation. “Seen through the lens of the creation of the Xbox, the story he tells from personal experience is both engaging and inspirational.”

Publishers Weekly calls Xbox Revisited “entertaining and refreshingly honest [with] useful business tips and frank, suspenseful narrative.” The book is packed with common-sense thinking and presents a strategic framework that can set change in motion at every level of community life.

Through Xbox Revisited, Bach equips others to effect change by revealing the defining successes and failures of the game-changing Xbox brand – and bravely sharing the highs and lows of his own compelling story. Offering unflinching insight into Xbox’s journey from garage-shop beginnings to international recognition, he rallies readers to become “civic engineers” and skilled community leaders in their neighborhoods and across the country.

According to Bach, ‘’You have to build the foundation before you put up the house. True in business, true in civics, true in life.’’

Robbie Bach joined Microsoft in 1988, working in various executive, leadership, and management roles during 22 years with the company. As Chief Xbox Officer, he led the creation and development of the Xbox business, including the launch of the Xbox and the highly popular successor product, Xbox 360. He retired from Microsoft in 2010 as the President of the Entertainment and Devices Division. In his new role as civic engineer, Robbie currently serves on the national board of governors for the Boys and Girls Clubs of America. He is also a board member of the United States Olympic Committee, Sonos Inc., Brooks Running Company, the Space Needle Inc., and local chapters of Boys and Girls Clubs and Year Up. In addition, Bach is a regular guest lecturer at universities nationwide, as well as a writer on business and civic issues; all profits from his writing and speaking activities are donated to charity. For more information visit RobbieBach.com.

To submit a media inquiry, schedule an interview with Robbie Bach, or request more information regarding Xbox Revisited or the author’s civic platforms, contact Cathy Williams at The Agency at Brown Books: 972-248-9500, cathy.williams(at)theagencyatbrownbooks(dot)com.

The Agency at Brown Books is a full-service public relations, marketing, and branding firm within a publishing house. As a subsidiary of Brown Books Publishing Group, The Agency is backed by 20 years of excellence and experience, and the one-of-a-kind, integrated platform is available to Brown Books’ affiliates, as well as non-affiliated authors, established writers, entrepreneurs, CEOs and anyone seeking smarter strategies for building their business.