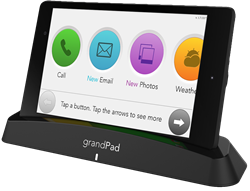 To commemorate the 37th annual National Grandparents Day on September 13, grandPad is offering anyone a chance to win six months of free grandPad service valued at $360. The technology company’s flagship product, the grandPad tablet, was created with seniors in mind. The senior tablet is customized for each user with apps, music, videos and video calling all for a $60 monthly subscription. The monthly membership includes the tablet and data connectivity via Verizon LTE nationwide service.
More than 70 million Americans are grandparents representing one in three adults according to the latest U.S. Census Bureau statistics. Many of these older seniors are living at home alone – in fact, the Administration on Aging found 47 percent of women over age 75 live by themselves. A risk of living alone is the lack of social interaction and this isolation can ultimately lead to health and safety issues. It is this vulnerable population that grandPad seeks to help with its simple, easy to use technology that engages and energizes aging seniors and connects them to families near and far.

"Being able to see my mom via the grandPad video chat function makes me feel close to her and gives me a sense of comfort even though I’m in California and she is in Iowa, but most importantly it makes an ordinary day special for her," said Scott Lien, CEO of grandPad. "For National Grandparents Day we want all families to feel that closeness and use September 13 to make a grandparent feel special."

A 2014 study conducted by Pew Research found that 53 percent of seniors over age 75 are not online.The study also found that some seniors felt their physical conditions or health issues were obstacles to embracing technology. grandPad has overcome those challenges by using a lightweight 7-inch tablet with a specially designed stylus. The unique user interface is senior-friendly with simple, large icons for any function on the device, large text and no password. For instance, to call a grandchild, the user simply taps on the photo of that person to automatically dial and call or video call. If they wish to send an email, they tap that icon, record their voice message and tap send. The great news for family caregivers is grandPad does all the personalization on the device before it leaves the warehouse. The company customizes the tablet for every user so if a grandparent loves Johnny Cash, Billie Holiday or Glenn Miller, the music is pre-programmed into the device when they receive it. Other functions are added as desired including apps for games such as Sudoku or Solitaire, videos, photo sharing via Facebook or Instagram and other activities to keep seniors engaged. There is no username or password required and the senior receives new content, such as photos from family, instantly.

Winning praise from both the technology and aging industries, grandPad has been heralded by media including being featured in a recent PBS special on caregiving. Fox News stating the tablet, "Designed for families to include grandparents in the social media conversation," and a reporter from PC World, who shared the tablet with his father said, "It was amazing, given how little my dad understands about technology, that he enjoyed using this device."

The grandPad promotion to win 6-months free service runs now until September 13, National Grandparents Day, participants can enter the givaway at: https://www.grandpad.net/grandparents-day-giveaway. The company is also encouraging users and their care circles to share photos and thoughts on grandparents leading up to September 13 to recognize the important role grandparents play in our society.

While grandPad is supporting National Grandparents Day, the company acknowledges that some seniors do not have close relationships with family members but can still be adopted by a friend or volunteer who wants to show they care. According to Alienated Grandparents Anonymous, some grandparents are abandoned or ignored by their adult children making the grandparent role untenable. These seniors are wounded emotionally and psychologically. Adopting a senior who has no one else is a special role anyone can play.

"Six in 10 grandparents have never celebrated National Grandparent’s Day and we want to change that," said Lien. "Over the next 20 years we’ll have more parents and grandparents to care for than children in our country – being a grandparent is a precious and important role in senior’s lives and this is just one way to show our older Americans how much we care."
grandPad recently signed partnership programs to provide grandPad tablets for the clients of in-home care services agencies. Partners include: LifeSprk, Sesen and 24 Hour Homecare.

About grandPad
grandPad was founded on the idea that technology should help bring families together. The mission of grandPad is to provide a solution that is intuitive, engaging and safe. The company’s flagship product, the grandPad, is a tablet solution for people who want a simple, safe solution that connects them with family, friends and professional health care workers. Simple joys should be simple to share. Learn more at: https://www.grandpad.net.