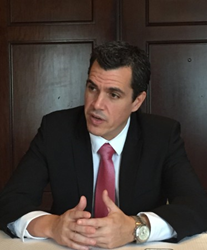 The business recruitment mission provided an opportunity for the delegation to ensure that international company leaders and global investors in the Atlanta market are aware of what the Panama Pacifico Special Economic Area has to offer.

Panama Pacifico Special Economic Area officials participated in a business recruitment mission to Atlanta, Georgia, in late August. During the trip, organized by the American Chamber of Commerce Panama, the team met with executives representing multinational corporations and informed them on the advantages of growing their business at the mixed-use development.

“The business recruitment mission provided an opportunity for the delegation to ensure that international company leaders and global investors in the Atlanta market are aware of what the Panama Pacifico Special Economic Area has to offer,” said Leo Gonzalez, Administrator of Panama Pacifico Agency.

In addition to conducting one-on-one meetings with corporate executives representing diverse industry sectors such as R&D, high tech, and logistics, the Panama Pacifico Special Economic Area team participated in business roundtable and special networking events. The team utilized the meetings to establish and maintain relationships with key company leaders located in the Atlanta area.
Some of the key information shared during the business meetings included the Special Economic Area’s favorable regulations such as special tax, labor, and legal incentives to companies that open a facility on the site, as well as the onsite One-Stop-Shop, which reduces red-tape with 17 government agencies available and onsite customs operating 24 hours a day, seven days a week.

“Our goal is to attract investments and create job opportunities in Panama Pacifico. The meetings in Atlanta were very productive and fostered the creation of key business relationships with target companies in the Southeast,” said Gonzalez.

About Panama Pacífico
Panama Pacifico is a mixed-use master planned community located on the former U.S. Howard Air Force Base near the Panama Canal and just 15 minutes from downtown Panama City. Developed by London & Regional Panama, a joint venture by British company London & Regional Properties and Southstone Investments, the project is one of the largest mixed-use developments in the world with 3,450 acres (1,400 hectares) of land assets. Panama Pacifico has quickly become a vital business hub and world-class global logistics center for leading multinational corporations seeking a competitive position in the Americas. More than 220 companies have already set up operations in Panama Pacifico. For more information, visit http://www.panamapacifico.com.