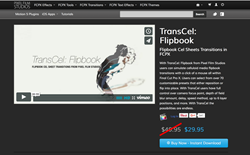 This Pixel Film Studios' Transition comes with over 70 presets!

With TransCel Flipbook from Pixel Film Studios users can simulate celluloid media flipbook transitions with a click of a mouse all within Final Cut Pro X. Users can select from over 70 customizable presets that either re-position or flip into place. With TransCel users have full control over camera focus point, depth of field blur amount, delay, speed method, up to 6 layer positions, and more. With TransCel the possibilities are endless.

With TranCel: Flipbook users can select from over 70 fully customizable presets. Transition from one frame to the next with cels that either re-position themselves or flip from one location to the next all within Final Cut Pro X.

With TransCel Flipbook users can generate a new look each and every time with a simple click of the mouse. Users have full control over focus offset, blur amount, transition speed method, layer position, background gradient, background drop zone, and more leaving full customization all within Final Cut Pro X.

TransCel Flipbook was professionally designed to work seamlessly inside of Final Cut Pro X. As a transition effect, each TransCel Flipbook preset can be dragged and dropped onto media and previewed in real time. With the published parameters found in the FCPX inspector, users have the ability to make further adjustments with just a few clicks of a mouse.