New study by PsychTests.com indicates that while the reasons for turnover are numerous, they are often related to an unhealthy work environment, rather than money. 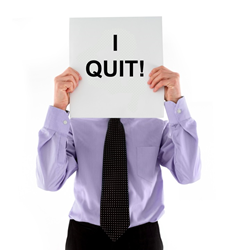 Quitters never win…unless quitting is in their best interest.

Issues related to a psychologically unhealthy work environment appear to be a frequent cause of turnover.

“I quit” are two rather unpleasant words to hear - unless of course, it’s in reference to an unhealthy habit or addiction. When an employee suddenly quits – particularly when it’s someone who plays a crucial role in the organization - the most common deduction as to why the person chose to leave will likely boil down to another 'revolting' word: money. Although inadequate compensation is one of the top ten reasons why employees leave a position, research conducted by PsychTests.com has uncovered some sobering statistics. Issues related to a psychologically unhealthy work environment appear to be a frequent cause of turnover.

Collecting data from 871 people who took their Turnover Probability Test, researchers at PsychTests discovered that the circumstances under which a person would feel compelled to quit are not limited to a desire for more cash. Among the 19 reasons for turnover assessed in the study, here are the top ten:

43% of the people in PsychTests’ study would feel compelled to quit their job if a better opportunity arose – one that allowed them to advance their career and expand their professional skills; 28% of the sample have already quit a job (or several jobs) for this reason.

31% would quit if they were working too many hours too often and didn’t have enough leisure or family time; 18% of the participants actually have quit for this reason.

30% would quit if they discovered that they were being underpaid compared to the industry standard for their position, or if they felt they were being inadequately compensated for their work; 18% of the sample have quit previous jobs for this reason.

30% would quit their job if their work wasn't challenging or stimulating enough; 17% admit to quitting previous jobs for this reason.

30% would quit if they were unable to advance to a more prestigious position in the company; 19% have quit for this reason.

30% would feel compelled to quit their job for personal reasons like parental leave or illness; 14% of participants have left their job for at least one of these reasons.

29% of the sample would quit a job for matters of convenience – for example, if their commute was too long, or they didn’t like the area where the company was located; 17% have chosen to quit their job for this reason.

29% would leave their job if their work or the company’s practices went against their ethics and values; 11% have already quit for this reason.

23% would leave a position if they could not get along with their supervisor/manager; 14% of the sample left their job for this reason. Another 20% of people would quit their job if their boss had a tendency to micromanage them, while 11% have quit in the past because they became frustrated with their boss’ inability to relinquish control.

“Some of the reasons people cited for quitting, or wanting to quit, are justifiable, if not understandable - like wanting to jump on an opportunity to grow professionally, leaving to deal with personal issues, or to avoid being stuck in traffic for hours every morning and evening,” explains Dr. Jerabek, president of PsychTests. “Yes, turnover is a costly problem, but there is little that management can do in these situations. However, of the top ten reasons, there are at least four – toxic work environment, lack of work/life balance, ethical dilemmas, and conflict with management - that are preventable.”

“For example, implementing a zero-tolerance policy as it relates to bullying or other forms of harassment be it physical, psychological, or sexual is essential. HR needs to step in and get more involved when disagreements occur between management and staff. Emotional intelligence training for managers, and pre-employment assessment to determine whether a candidate’s values match those of the company culture can be extremely helpful. The bottom line is that turnover may not always be preventable, but there are measures that a company can take to reduce this tendency.”

Want to assess your turnover potential? Go to http://testyourself.psychtests.com/testid/3607

Reasons for turnover isn’t limited to wanting more money.Issues related to a psychologically unhealthy work environment appear to be a frequent cause of turnover.