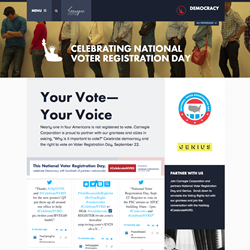 "Join in an interactive experience and conversation on this fundamental privilege of citizenship...voting rights."

Carnegie Corporation of New York is introducing a digital update of the traditional Carnegie forum: Carnegie.org, a redesigned, dedicated space for convening thought leaders, innovators, and interested audiences for the sharing of collective knowledge about important issues of our times.

Voting rights is one such issue, long a focus of the Corporation’s Democracy program. Launching on the eve of National Voter Registration Day, Carnegie.org invites Americans to join in an interactive experience and conversation on this fundamental privilege of citizenship incorporating grantee voices, social media initiatives, historical documents, and multimedia through innovative partnerships.

“We had a tremendous opportunity to design a site capitalizing on Carnegie Corporation’s distinctive position as a convener of expertise and dedicated communities in each of our program areas,” said Deanna Lee, Chief Communications and Digital Strategies Officer. “Our steady, 100-year commitment to issues deeply important to Andrew Carnegie, from international peace to education and civic engagement, has led to a unique ability to build on the work of multiple change-making, nonprofit grantees working towards similar goals.”

Each of the Corporation’s program areas—Democracy, Education, International Peace Security, and Higher Education and Research in Africa—is now showcased with its own subdomain or hub, with a focus on utilizing various new publishing technologies tailored to what each program especially offers, and allowing for varying kinds of engagement and learning.

For National Voter Registration Day, the Democracy program is proud to offer on its hub:

In building a site focused on the power of convening, Carnegie Corporation partnered with a number of talented designers, developers and producers in addition to our many grantees. They include website designers Blenderbox and Fable developers Phase2, and content partners TINT and Genius. All have contributed to a design guided first and foremost by the Corporation’s mission, one particularly suited to the potential of digital technology and engagement with information.

“Andrew Carnegie believed in the ‘advancement and diffusion of knowledge and understanding,’ and in the importance of transparency. Throughout its history, Carnegie Corporation of New York has adhered to these principles. The Corporation was, for example, the first foundation to publish an annual report,” said Vartan Gregorian, President of Carnegie Corporation of New York. “We are delighted to continue in that tradition with a new website that tells not only our story, but that of our community—including the Carnegie sister institutions and our grantees.”

New features will continue to be introduced on Carnegie.org—a fully responsive site—in the upcoming months. Carnegie Corporation of New York is grateful to the many people who contributed to this site through surveys and feedback, and invites users to share their ongoing thoughts at externalaffairs(at)carnegie(dot)org.

About Carnegie Corporation of New York

Carnegie Corporation of New York was established in 1911 by Andrew Carnegie to promote the advancement and diffusion of knowledge and understanding. In keeping with this mandate, the Corporation's work focuses on the issues that Andrew Carnegie considered of paramount importance: international peace, the advancement of education and knowledge, and the strength of our democracy.