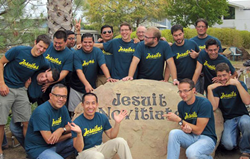 First- and second-year novices at the novitiate in Culver City, California.

In 1958, Pope Francis began his priestly vocation when he entered the Society of Jesus and became a Jesuit novice.

In 1958, Pope Francis began his priestly vocation when he entered the Society of Jesus and became a Jesuit novice. This fall, 45 new novices in the U.S., Canada and Haiti are joining his ranks and becoming Jesuits, members of the largest religious order of priests and brothers in the Roman Catholic Church.

Prior to joining the Jesuits, the novices lived, worked and studied around the world. Some were musicians, teachers, military officers or scientists, and a number have completed multiple advanced degrees.

Jesuit formation can take anywhere from seven to 13 years. For the next two years, the novices will live together in community and engage in “experiments,” experiences that are part of the detailed plan for Jesuit formation designed by St. Ignatius, founder of the Society of Jesus. Typical experiments include teaching at a Jesuit school and serving the sick and elderly at a hospital. Through hands-on exploration, the experiments help novices learn about how they might serve the Society and others.

Read the biographies of each of the men who has answered God’s call to ministry here and learn more about Jesuit formation at jesuitvocations.org.

The 45 men entering the Society of Jesus in Canada and the U.S. are:

Founded in 1540 by Saint Ignatius Loyola, the Society of Jesus (Jesuits) is the largest order of priests and brothers in the Roman Catholic Church. Jesuit priests and brothers are involved in educational, pastoral and spiritual ministries around the world, practicing a faith that promotes justice. In Canada and the United States, there are 30 Jesuit colleges and 80 pre-secondary and secondary schools with a shared goal of developing competent, compassionate and committed leaders in the service of the Church and society. Jesuits minister in parishes and at retreat houses and serve as chaplains at prisons, hospitals, nursing homes and in the military. In Canada and the U.S., the Jesuits are represented by the Jesuit Conference of Canada and the United States, headquartered in Washington, D.C. For more information on the Society of Jesus, visit http://www.jesuits.org.